It’s a lot to take in, I realise. But the significant thing here may be that BMW’s never before sought to filter out, wrap up or conceal any of that complication. It has often come in for criticism as a result. Might they finally be getting it, though? Be making life just a little bit simpler for the driver, and configuring the car at least a little bit on his behalf? These are certainly only the most embryonic of signs if so – but they’re good ones. 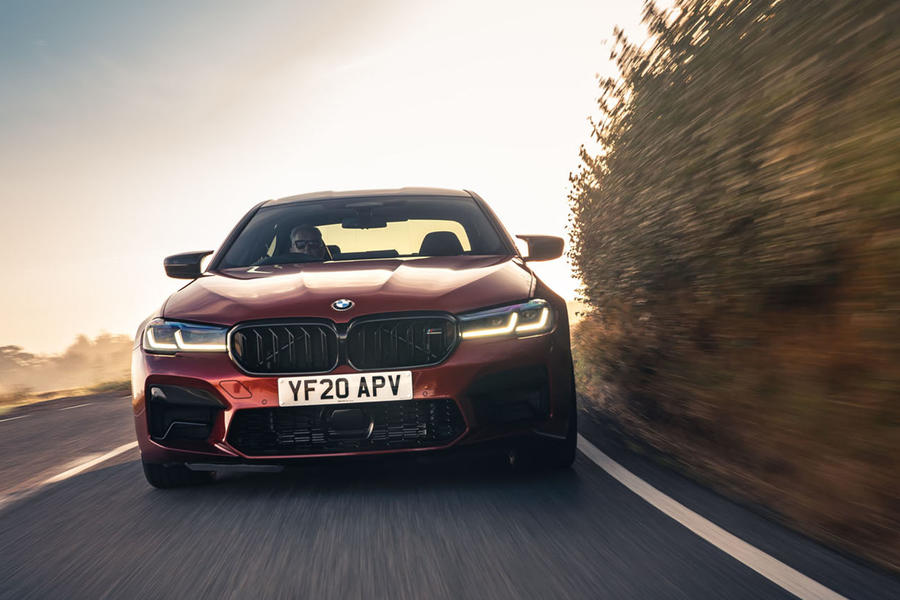 Most of the car’s driving experience is as it was. The M5 remains one of the most dynamically ambitious performance cars of its kind. Even though driver-configurable four-wheel drive systems are now pretty common in the super saloon niche, few cars like this attempt such versatility. The M5 tries to be as taut, agile and playful as a one-tonne sports car in one moment and as fast as a supercar the next, while offering everything against that backdrop of high-speed stability and real-world touring comfort on which the lumpiest German autobahn specials have been trading for decades. And judged strictly objectively, it succeeds really well at much of that stuff. I’m not sure an Alfa Romeo Giulia Quadrifoglio, probably still the most sports-car-like of all performance saloons, attempts to cover so much ground.

The M5’s engine and drivetrain are unchanged, and they make for an enormously fast and potent saloon. Technically a Mercedes E63 S will give you more torque, but I’d be deeply suspicious of anyone who said they could use any more of it on UK roads. The V8 has huge, elasticky-feeling mid-range reserves and responds keenly even to smaller changes in pedal position. It also covers the last 2000rpm of its crankspeed up to the 7200rpm redline really freely for turbocharged engine.

The car’s automatic gearbox can be quite aggressive with its engagement in the sportier driving modes, surprising you sometimes when it’s shifting by itself. It’ll almost always deliver a downshift in manual mode when you ask for it, though – and you can almost always choose a comfier operating setting if it’ s getting spiky or unsettling. There are rather a lot of those operating settings, after all.

My only lingering disappointment was with the way that engine sounds. It’s got a digitally synthesized audible character that’s still too smooth and anodyne to trick your ear. It doesn’t seem detailed enough, and doesn’t adapt nearly enough to changes in throttle load, to sound like authentic V8 rumble.

1 hour ago
Jaguar Land Rover begins recovery from £861m loss in 2020
2 hours ago
Lotus Emira handed public debut as Goodwood celebrates brand
2 hours ago
Opinion: Why the best cars are the most surprising ones
4 hours ago
Stellantis and Foxconn partner to form Mobile Drive software arm
5 hours ago
Vauxhall Vivaro-e Hydrogen van arrives with 249-mile range