The driving environment is roomy (you sit high) and there’s more room for legs and feet than in the petrol 500. Take a peep at the rear cabin, though, and you will soon see this is no four-metre supermini: accommodation goes from cramped for two to merely tight.

The interior materials are mostly of high quality. The instrument array is still based on the original’s single dial, but the graphics are better organised and much clearer (partly because there’s no need for the former’s confusing concentric tachometer scale). The wide screen dominates the centre of the fascia, but the whole treatment is classier and more modern. A simple row of push-push ancillary switches runs below the screen, and prominently sited below those are the PRND buttons that make this Fiat go. It’s all very satisfying on the eye.

The seats are better, too. They’re not sporty but there’s now a more conventional relationship between the seat and the steering column, which now adjusts for reach as well as height.

Like most decent electric cars, the 500 zips off the mark with ease and energy, with torque and smoothness of response its keynotes. A whine accompanies progress, but it’s all very refined and, like in most electric cars, the 0-40mph energy belies what seems a fairly routine 0-62mph time. You get the choice of three driving modes – Normal (which replicates conventional driving), Range (a two-pedal set-up with strong regenerative braking) and Sherpa (others would call it Eco), which, if your range meter is showing 160 miles, say, adds another 15-20 by reducing all power consumption and performance.

It’s a thoroughly appealing and easy-to-use powertrain except for the dead-stop braking facility in Range mode, which is a bit more abrupt than most would prefer. As far as we could judge on a mixed-roads 80-mile drive, the offer of 160-200 miles (the latter if you make generous use of Sherpa mode) is realistic.

Given the differences between the electric and petrol 500 models, it’s surprising how similar they are in some ways. The EV’s steering is accurate enough and relatively light but has the same rather artificial feel (others are far better) and, despite the odd effect you would expect the extra body weight to have on ride quality, the new car can seem rather bouncy in some modes. However, it remains quiet over bumps of all kinds, which feeds the occupants’ impression that it’s a refined machine. 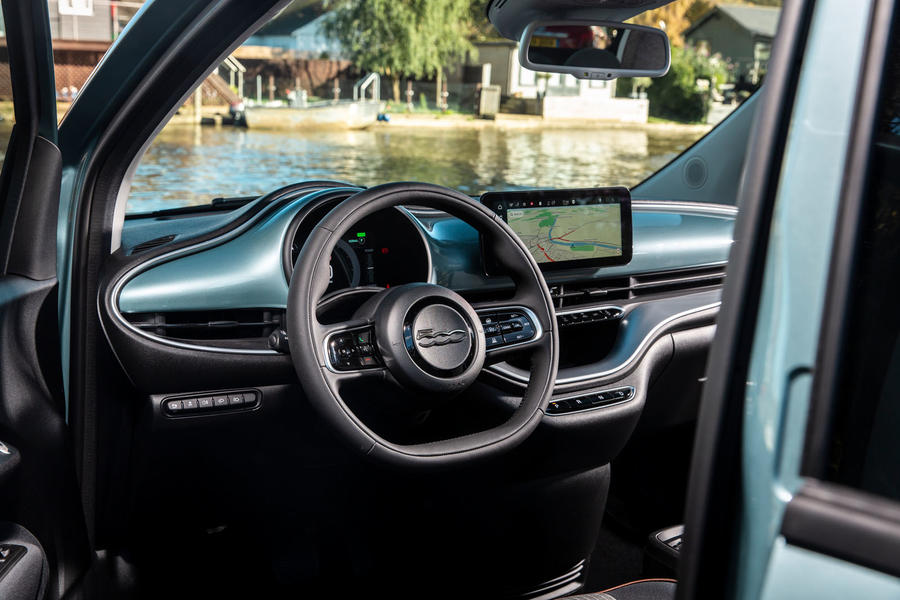