Driving the car does occasionally bring to mind what driving small cars with small engines and two-pedal gearboxes used to feel like, before turbochargers and clever gearbox tuning came along. The 123bhp turbo triple does a credible job at pottering speeds on middling throttle, and its 148lb ft of torque sounds like it should be enough for any auto ‘box to work with. But in practice the twin-clutch unit can be a notable dampener on both performance and drivability.

Leave the car in Normal mode and that gearbox is quick to shift up even in town, making the car initially sluggish at urban speeds. It’s also reluctant to kick down, needing a big prod of pedal before it’ll do so assuredly – no doubt a result of the impact such tuning has on the car’s WLTP lab test result.

Choose Sport mode instead and, although the car’s general drivability and responsiveness improves, it then becomes a little over-eager to kick down under greater loads, hunting for a lower ratio when it ought to just pull through the mid-range. ‘Manual’ mode isn’t blameless either; electing to time your gearchanges yourself makes the powertrain more predictable and controllable up to a point, but because Ford hasn’t fitted a kickdown switch at the bottom of the accelerator pedal’s travel, the gearbox won’t hold onto your chosen ratio under full power. Curiously annoying, that.

The Puma’s outright performance level is respectable although not particularly eager- or keen-feeling. It’s striking how much less endearing the Ecoboost engine seems when you’re not deciding for yourself when to rev it out or timing each gearchange manually, but refinement is decent and real-world fuel economy likewise.

Ride comfort is a bit of a drawback. The Puma has flatter, crisper and more agile handling than the average crossover hatchback, and unmistakably so; it’d be a tidy-handling car in almost any hatchback class you dropped it into, and it’s a grippy and enthusiastically handling prospect when the surface it’s operating on suits it.

But the lowered, firmed-up sport suspension and 18in alloy wheels that come with ST-Line X Vignale trim do adversely affect the car’s dynamic appeal. They make it come up short on ride compliance and fluency around town and on uneven country roads, and cause it to fidget and thump over motorway expansion joints. Unlike better-sorted performance Fords where high damper rates can be made to pay off by granting better vertical body control at greater speeds when you really need it, the Puma Vignale’s just make it ride in tetchy, restive and slightly wooden fashion when the road surface gives the car a proper examination. 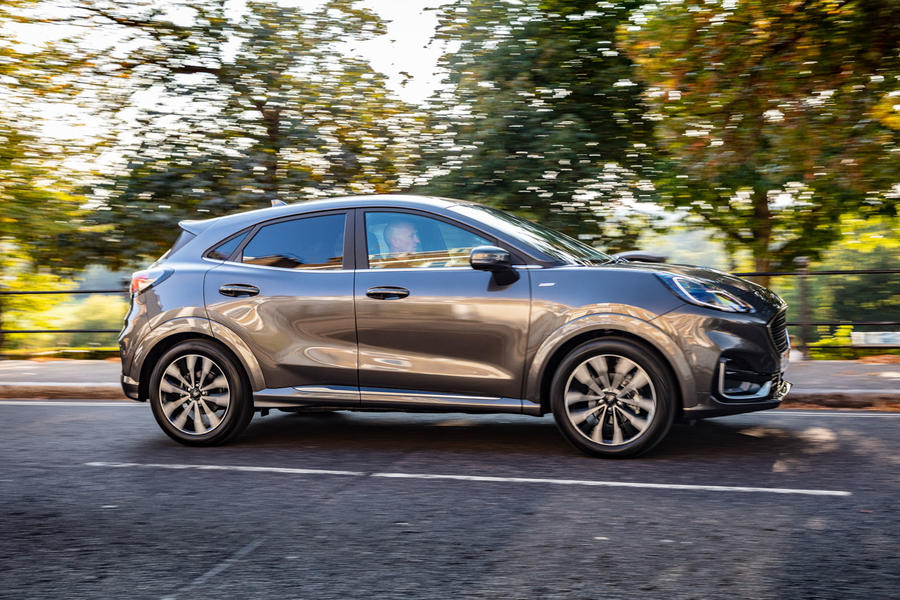