“Hey, Mercedes, I’m stressed” is all you need to say. In response, a swirly pattern will appear on the huge central touchscreen, the seats will begin massaging your back, and the stereo will begin to play soothing music.

Somewhat ironically, trying to work out how to control all of these things is what made me stressed in the first place.

The new Mercedes-Benz S-Class, tested here in the UK for the first time, is a hugely complex piece of machinery from an interior technological standpoint.

More so than from a conventional automotive engineering standpoint, at least in this S500 form. Heavily electrified versions of the S-Class will follow but the S500 has a conventional 3.0-litre turbocharged in-line six-cylinder petrol engine, driving through a nine-speed automatic gearbox to, in this 4Matic variant, all four wheels. It makes 430bhp and 389lb ft. A very mild-hybrid 48V starter-generator aside, it’s conventional tech. You’ll still be able to get a diesel, too, which will do the meat of S-Class sales in the UK.

The variant tested is a long-wheelbase car, as are 80% of all S-Classes sold in Britain, because they have tremendous rear leg room and, if you’re a regular front-seat dweller, the chances are you bought an SUV instead.

The new S is based on a heavily re-engineered version of Merc’s Modular Rear Architecture (MRA) platform, which, despite lots of aluminium in its make-up, weighs 1990kg, has air suspension all round and, as an extended variant, is 5.3m long.

It also has the option of rear-wheel steer, fitted here, which reduces the turning circle by up to 1.9m – ‘up to’ because, yes, even that’s quite complicated. Depending on the wheelbase, whether your S is rear- or four-wheel drive, and even owing to the wheel sizes (anything bigger than 20in means 4deg rather than 10deg of rear steer), an S-Class can have any of 12 different turning circles. This one’s 10.9m, vastly better than the 12.8m it would be without it. 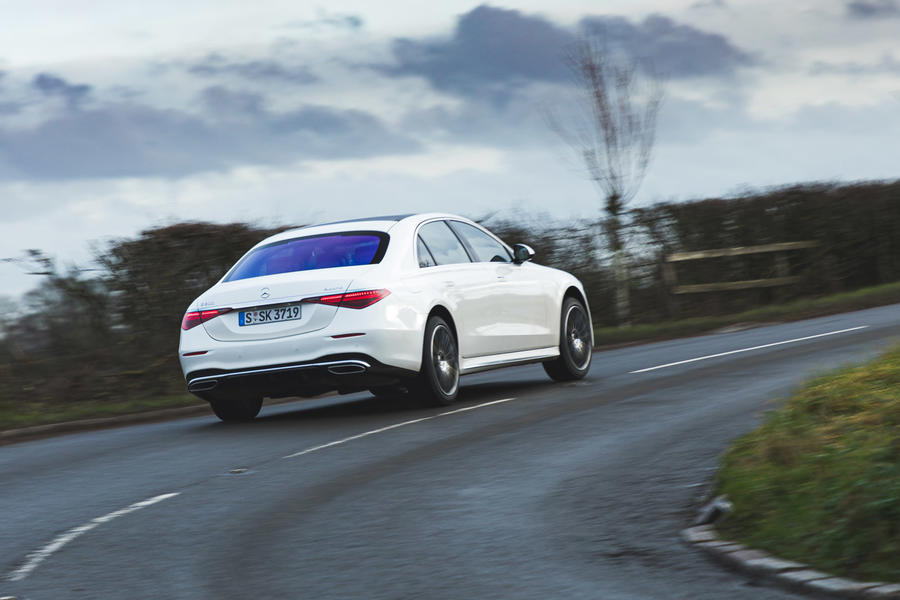