It looks pretty sporty, doesn’t it? And the minute you flick it left or right into the first bend you come across, you find yourself thinking: “Christ, that’s quick steering for a small crossover.” But the Countryman is like one of those celebrity impersonators you can hire for parties, who look the part but lack bona fide personality, because you don’t feel at ease driving it spiritedly.

Yes, the steering is alert, but there’s no heft building as you wind on lock, you never really gel with what the front wheels are up to, and end up making numerous little corrections to get you around every corner. In the Ford Puma, all you’d need is one clean sweep of the wheel, such is the beauty of its steering.

The Countryman’s tight body control and decent grip do let you carry good speed along a twisting B-road, though, and it’s well balanced: if the nose starts pushing wide because you’ve barrelled in with excessive enthusiasm, it’ll tighten its line neatly if you lift off the accelerator.

Of course, there’s the inevitable trade-off of a stiff set-up in the ride. The Countryman jolts over expansions joints and broken town roads, and jiggles and jostles you around on all but the most polished motorways. A Volkswagen T-Roc is a much calmer-riding companion if that’s what you’re looking for.

And performance? In electric-only mode it’s not rapid but it’ll mooch about town contentedly and climb steadily to over 70mph. Add the 1.5-litre triple into the mix, which joins the party very smoothly but can take a couple of seconds to do so after you’ve buried your foot on the accelerator, and it’s quite sprightly.

It’s hard to gauge the claimed increase in range because our battery wasn’t fully charged to begin with (a process that takes just under two and a half hours from a 7kW home wall box), but we saw nearly 20 miles from a 92% charge. And, if you bear in mind that was mostly energy-zapping autobahn driving, 30-ish miles on a mixed route seems feasible.

When the battery was depleted, with a sensible attitude to throttle openings, the petrol side of this symbiotic powertrain averaged between 35 and 40mpg. There’s a pleasantly muted three-pot thrum when you rev it out, and, elsewhere, not much road or suspension noise, but the gusting wind noise at 70mph is irksome.

Inside, the Countryman retains all its splendour. The driving position, for example, is bang on, especially with the comfortable sports seats of our test car. And there really isn’t a small crossover that’s finished any better; the plethora of quality materials and smart design really make it feel like a cut above anything else. Mind you, the lack of a cowl for the new digital dials makes them hard to read when bathed in sunlight.

It also continues to be one of the more practical options among its contemporaries, with roomy seating for four adults (five at a push), reclining rear seats and a sensibly sized trunk. 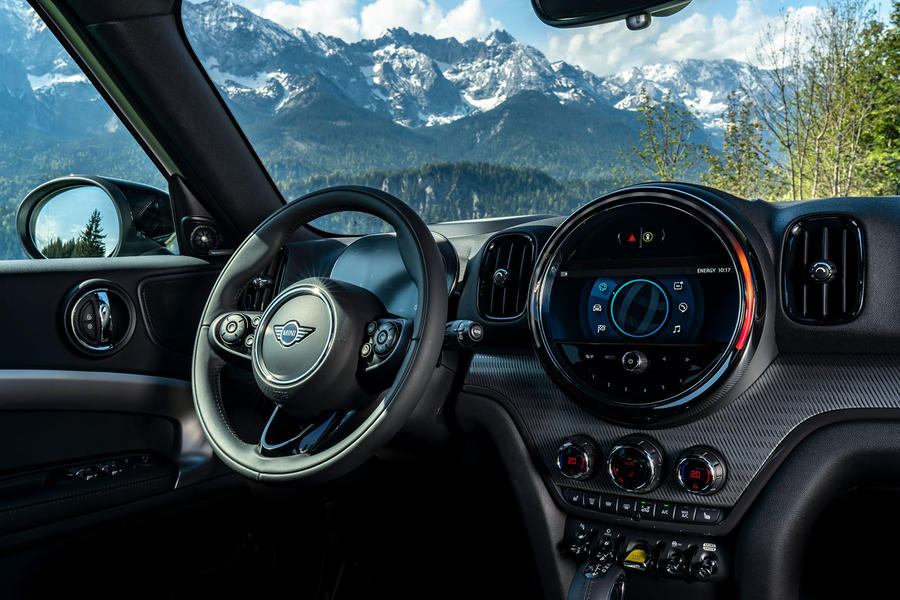