The answer to that question depends dramatically on what you’ve been driving beforehand. If you’ve been used to grumbling V8s that can rev as well, this V6-electric powertrain (whose noise takes over only when the silence of the electric drive runs out) sounds a bit thin.

From the outset, we believe the best approach to the E-Hybrid is to glory in the new capability of the 2021-spec Panamera’s PHEV powertrain rather than wishing it were something else. The unique combination of performance and economy is deeply impressive, even if the WLTP figures quoted for mpg and CO2 output still don’t tell the full ownership story.

Advertised as good for 34 miles of electric cruising before there’s any need to start the petrol engine, the Panamera PHEV showed on test that its real-world battery-only range can indeed beat 30 miles, an impressive performance for a big car whose kerb weight has been increased 300kg by the presence of an on-board 17.9kWh battery. The Panamera V6’s total performance is augmented by the presence of the associated 134bhp electric motor (mounted in the bowels of the eight-speed dual-clutch gearbox), which especially assists at the low end of the performance range. As a result of the twin-powerplant set-up, this Panamera has no fewer than six driving modes, with the self-explanatory E-power, Hybrid Auto, E-hold and E-charge driver choices to go with the usual Sport and Sport-plus.

Even when you use electric power only, the Panamera delivers quite powerful acceleration off the mark and can cruise at speeds approaching 80mph, although when it has the aero loads of all that speed to overcome, the range falls dramatically. Better to manage the battery power yourself or let Hybrid Auto do it. On our 80-mile round trip on A-roads, back roads and through villages – always taken briskly – the car returned to base having averaged 78mpg, a very good performance. Of course, if we’d continued to Edinburgh, the figure would have fallen dramatically, but then most journeys don’t do that.

As with many electrified cars, you don’t seem to drive with quite the abandon you might use in, say, a Panamera GTS V8 because you become (pleasantly) occupied with saving fuel, maximising regen braking and either eking out the battery power or replenishing it (via the E-charge mode) so you can glide silently through the next town. This may not sound like a traditional driving challenge, but it’s absorbing and has the potential to save copious amounts of fuel compared with a ‘normal’ car.

One thing’s for sure: the latest Panamera PHEV is light years ahead of the original hybrid version of this model, which was distinctly poor in sound, responses and all-round performance. The minutiae of the driving modes has been carefully tweaked and in particular there has been much development of the way the brakes integrate the retardation available from electric power regeneration and the usual friction system to provide something close to the powerful, self-energised feel of a petrol-only Porsche. 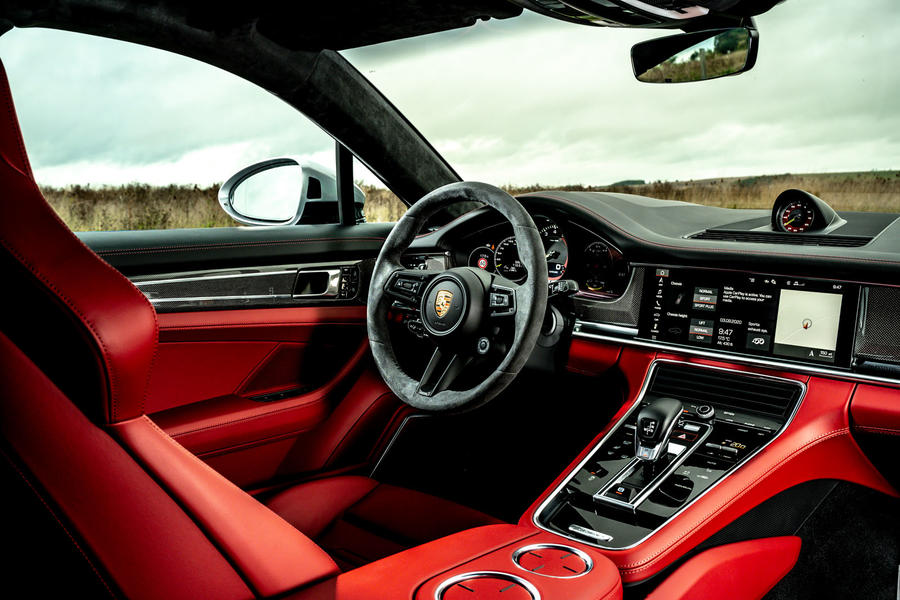