That wouldn’t be good enough for the EU on its own, however, so the Ignis now comes only as a mild hybrid. It’s less mild than the pre-facelift variant, despite retaining a 12V architecture while manufacturers of pricier cars go for 48V, thanks to a larger lithium ion battery (0.12kWh, up from 0.036kWh). Which explains the rather misleading rebadging from SHVS to Hybrid.

The upshot of the evolved engine, bigger battery and more powerful belt-integrated starter-generator (BISG) is a best WLTP fuel economy figure of 55.7mpg and CO2 emissions of 114g/km. This drops to 51.3mpg and 124g/km if you swap the standard five-speed manual gearbox for a CVT (which, let’s be honest, is rarely desirable) or 51.9mpg and 123g/km if you want Allgrip four-wheel drive.

Allgrip gives the Ignis permanent four-wheel drive and shifts the power bias rearward when required, via a viscous coupling. It’s not really detectable in normal driving, but Suzuki says it improves cornering ability and quite rightly points out that it’s of benefit to rural dwellers, especially in the winter. And even with Allgrip, the Ignis weighs less than a tonne.

The first thing you notice when driving the 2020 Ignis is the improvement in the ride quality. Suzuki had already upgraded the Ignis’s suspension in early 2018, in response to feedback about the harshness for rear passengers, and it has made an improvement once again with the mid-life facelift. The ride still isn’t amazing, bumping over broken asphalt, particularly at low speeds, but it’s without doubt more comfortable than when the Ignis first arrived.

Refinement is noticably better, too, particularly wind and road noise on the motorway, even if this still isn’t a car you would want to use for 70mph work every day.

Some may malign the fact that Suzuki’s new engine has, as in the Swift Sport, reduced power in the Ignis, in this case from 89bhp to 82bhp. Not that you really notice it; this was never a fast car anyway, and nor need it be. In fact, the claimed 0-62mph is unchanged, at 12.8sec, and getting up to motorway speed down a slip road never makes you sweat. Having the control of a manual ’box certainly is beneficial in this regard.

As for the improvement to fuel economy, our test car averaged an impressive 51.8mpg over 850 miles of mostly motorway and B-road driving, with 0.2 litres saved at idle thanks to the BISG. And we know from experience that better is possible; in fact, 65mpg shouldn’t be impossible if you drive sympathetically in a front-drive model.

Of course, the Ignis isn’t a car for handling, either. Steering it on country lanes feels like you’re having a relaxed conversation in which it amiably agrees to do what you’re saying, rather than an exchange between a soldier and sergeant major, but what else would you expect from what is essentially a city car? 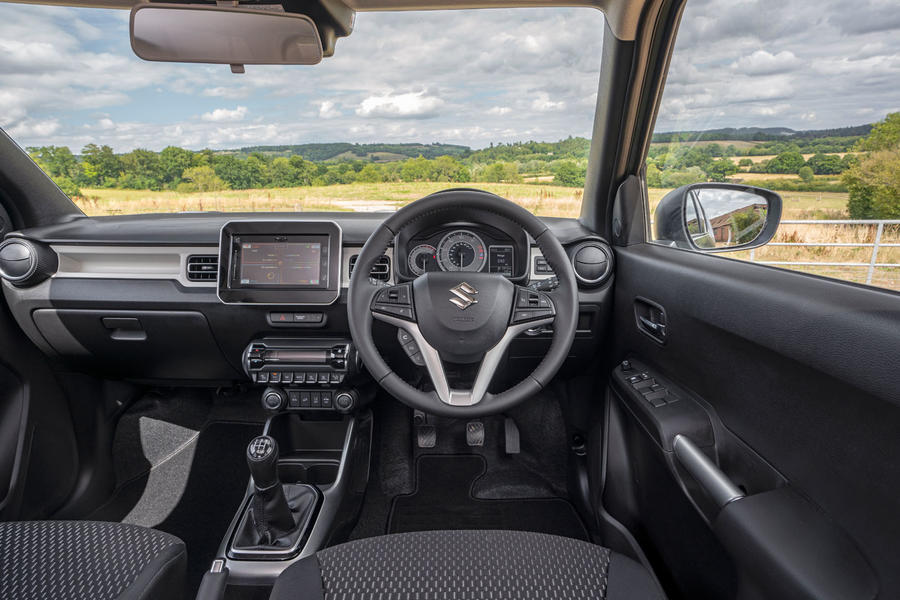