The V90’s interior was already comfortable and capacious, with plenty of Scandi style and a well-laid out dashboard built around Volvo’s Sensus infotainment, which uses a portrait-oriented 9.0in touchscreen. As a result, the updates here are also sparing, largely through the addition of new upholstery and trim options.

There are also USB-C ports, an upgraded Bowers & Wilkins stereo (including a setting that Volvo claims mimics the sound of your favourite jazz club) and – bang on trend for 2020 – a revamped Advanced Air Cleaner with particle filter.

Most importantly for many estate buyers, the V90’s boot remains unchanged, offering a substantial 560 litres capacity, rising to 1526 litres when the seats are folded down. That space is easily accessible, too.

We tried the mid-range B5 petrol. This offers 247bhp from its Drive-E-badged 2.0-litre four-cylinder petrol engine, which is now aided by a 48V integrated starter-generator. Capturing energy under braking and coasting, this bumps the B5’s official economy up to a maximum of 40.4mpg – a figure that our test suggested isn’t overly optimistic.

Despite the V90’s considerable size, the petrol engine does a good job of propelling it along. The mild-hybrid technology makes it smooth and quiet at low speeds, and while that refinement can be briefly lost when you try to access the engine’s power urgently, it’s capable of pleasingly brisk progress once up to speed.

The ride quality is good, with the suspension and our range-topping Inscription model’s 19in wheels soaking up bumps and offering smooth travel both in town and on faster roads.

The steering can feel a touch heavy at low speeds, but not excessively so, given the size and weight of the V90, and it’s stable and confidence-inspiring on faster roads.

The V90 still isn’t dynamic or engaging as more performance-orientated estates and is happiest at a more relaxed pace. While that might disappoint Rickard Rydell, it suits the nature of the car well, particularly with the extra refinement offered by this new mild-hybrid petrol engine. 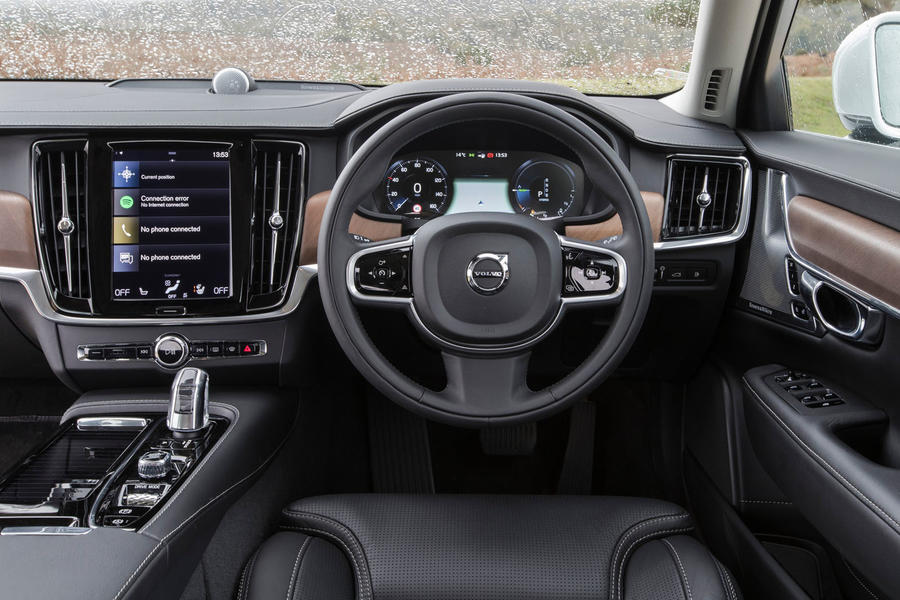