The bigger quandary, and the one I plan to answer over the next few months, is whether to go down the petrol route at all. That’s why I’ve swapped the Clio for a Zoe – the other half of Renault’s supermini story.

Whether customers are cross-shopping the two is up for debate – given the near £10,000 gulf in price even once you take the government electric car grant into account – but now this second-generation model has a WLTP-certified 238-mile range between charges, it can no longer be relegated to ‘second car’ status.

Our Zoe is a top-spec R135 GT Line, the most popular trim among UK buyers. It’s the Rapid Charge version, which carries a £1000 premium, so allows for 50kW recharging – something I’ll be taking frequent advantage of given I’m a renter and there is nowhere suitable to install the free BP Chargemaster wallbox Renault is offering Zoe customers. Luckily, there are several public fast chargers a mile or two from home.

The car arrived showing 100% charge and 200 miles of range, so we’ll have to see if that improves with careful driving – or if it plummets as we head into the winter months. We specified the optional Winter Pack and its heated steering wheel, but otherwise GT Line models come fully equipped as standard, with a 9.3in touchscreen, rear-view camera, cruise control and the same brilliant hands-free entry keycard as the Clio.

First impressions? It’s all so similar and yet so different, with a much higher driving position because of the underfloor batteries. I’m of the opinion that the more bolstered a driver’s seat the better, but my other half (who wears a glucose monitor on her arm and was constantly knocking it loose in the Clio) much prefers the Zoe’s less cocoon-like chairs. They still give plenty of support and the half-leather, half-fabric design looks the business, too. Lighter materials all round make the cabin feel more spacious than the Clio, even if it’s not physically any larger.

Despite their weight difference, the Zoe and Clio are closely matched on performance, with the heavier EV needing half a second longer to reach 60mph. Instant off-the-line acceleration makes it feel quicker, though, even if the stopwatch says otherwise. The oddly mechanical gear selector isn’t a patch on the Clio’s substantial shifter, mind.

After a few short journeys, I’m already wondering whether the all-digital dash will feel up to par once I get a turn in editor Mark Tisshaw’s Honda E, and how well it will perform in the corners. The Clio has set the bar surprisingly high.

Good on Tom for jumping straight from the Clio to the Zoe. I imagine there are many buyers out there who would not be so willing – even if the EV comes with a 238-mile range. For those people, the just-launched hybrid Clio E-Tech could make for an appealing stepping stone. 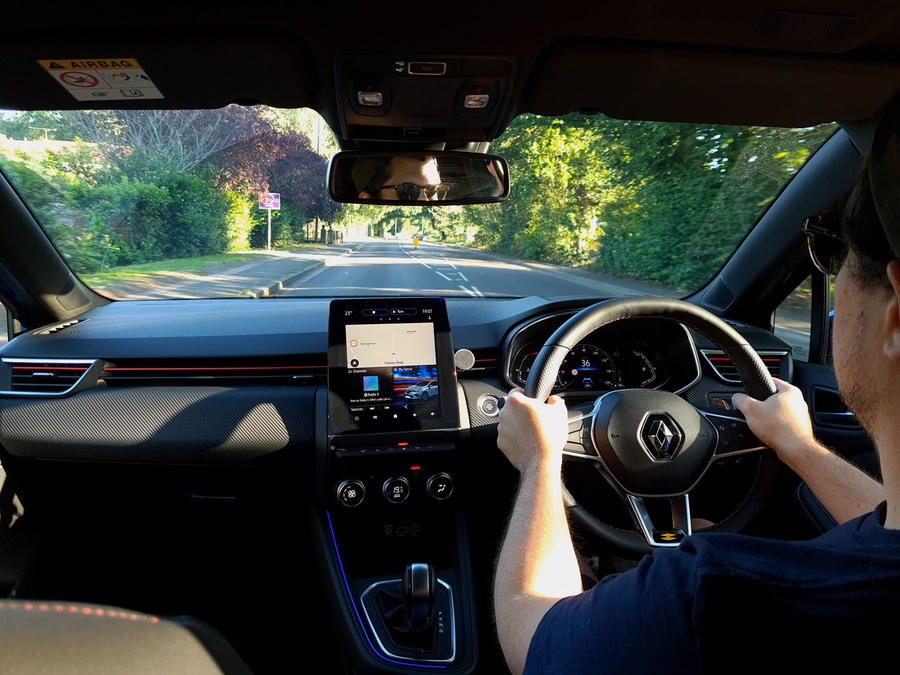