What we are therefore going to find out is whether, in 2020, Skoda can compete directly with the Bavarians, which is something that possibly hasn’t happened since (and please don’t quote me on this) Václav Bobek’s 1100cc Skoda Supersport beat the bigger-engined Formula 2 BMW of Zdenek Sojka during the 1950 Czechoslovak Grand Prix at Brno. One imagines a few corks were popped from bottles of Bohemia Sekt that evening, and if our Superb can score a recommendation over the 520d SE, it’ll be a similar story, albeit one unfolding at Skoda’s UK public relations offices in Milton Keynes.

One thing in the Skoda’s favour is that it is positively overflowing with kit, much of it genuinely useful. Take, for example, the flashlight and 12V adaptor I’ve already found in the boot, and the umbrella compartments in the front doors.

The ‘key’ features list runs the length of an A4 page but, as far as we’re concerned, the most important elements are the adaptive cruise control, 10-speaker Canton sound system, 9.2in touchscreen display, matrix LED headlights and rear parking camera (useful because the car is longer than a VW Passat, although shorter than an Audi A6 et al). We’ll touch on items such as the ‘virtual pedal’, voice command and park assist, and their usefulness or otherwise, in future reports.

Meanwhile, elements such as the privacy glass, gloss black interior inserts and scrolling indicators are a matter of personal taste. My opinion is this L&K looks like a car most of us would be proud to own.

However, if the Superb estate really is to box above its traditional utility division, ride comfort and rolling refinement will need to play the biggest part. Further to this, with so much equipment to transport and the need for that transport to double up as a stable platform from which to shoot car-to-car ‘tracking’ shots on the move, automotive photographers like myself crave cavernous estates with a magic-carpet ride. 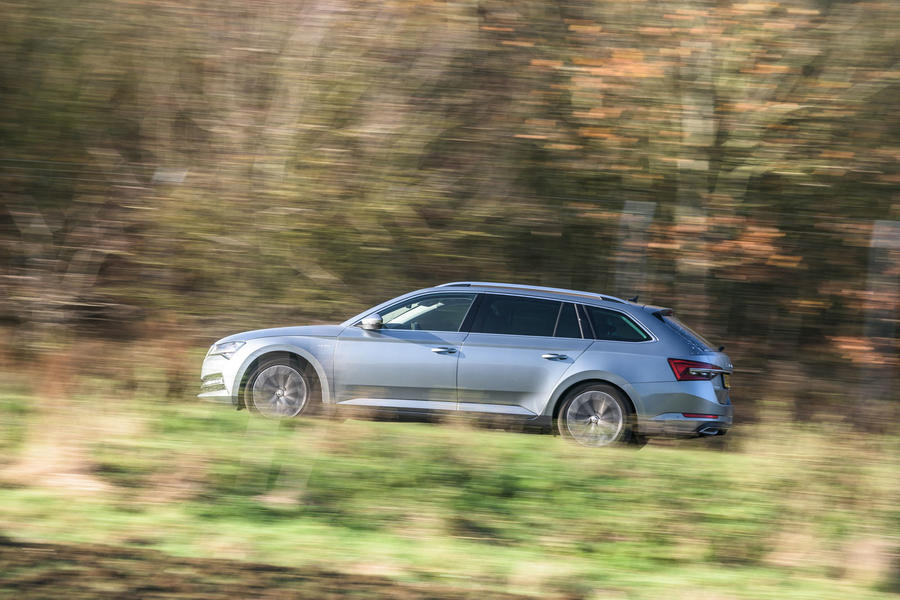 In this case, my first impressions have been very good, the combination of Skoda’s non-Sport chassis, adaptive DCC dampers and the long wheelbase generating pliancy that easily betters many cars with expensive air suspension. In an era when you can find 19in wheels even on a supermini, the Superb’s unique (and somewhat inelegant) 18in Propus Aero alloy wheels also look a wise decision, and with such big wheel arches to fill, there’s plenty of sidewall to absorb tired British roads. Admittedly, go too fast and the vertical control movements seem to pay homage to Citroën’s egg-caressing 2CV, but it’s a worthwhile compromise and with DCC there’s always the option of firming up the suspension when I’m in a rush. Which, in fairness, is more often than not.