Volkswagen has opened order books for several variants of its updated Tiguan SUV, with prices for the Ford Kuga rival starting from £24,915.

The plug-in e-Hybrid and range-topping Tiguan R are yet to be priced up, but buyers can now configure the standard car with a range of trim level and powertrain options. The entry-level car is equipped with a 1.5-litre turbocharged four-cylinder petrol engine producing 128bhp, a six-speed manual gearbox and a raft of standard equipment including 17in alloy wheels, LED headlights and a suite of driver assistance functions. The 1.5-litre engine is capable of between 37.2 and 44.8mpg, and emits 143-159g/km of CO2.

Prices climb to £26,915 for Life trim, which is expected to be the best-selling variant and is available additionally with a 148bhp 2.0-litre turbocharged diesel engine and a seven-speed DSG automatic gearbox. Life also brings larger 18in wheels, rear privacy glass, adaptive cruise control, front and rear parking sensors and road sign recognition.

The updated Tiguan has two range-topping trims in its standard form: Elegance at £32,430, and R Line from £32,730, each of which is available with a choice of petrol and diesel engines and equipped with the automatic gearbox as standard.

The Tiguan is Europe’s favourite SUV, with more than six million examples having been sold since it came out in 2007. The second-generation model was launched in 2016, and this is the first major upgrade it has received.

The new Tiguan R joins the larger Touareg R as part of the performance division’s rapidly expanding line-up. It uses the fourth-generation EA888 2.0-litre turbo petrol engine, which takes it from 0-62mph in a claimed 4.9 seconds and on to a top speed of 155mph.

As usual, this four-cylinder unit is mated to a seven-speed dual-clutch gearbox, four-wheel drive and the Dynamic Chassis Control system, which lowers the ride height by 10mm. 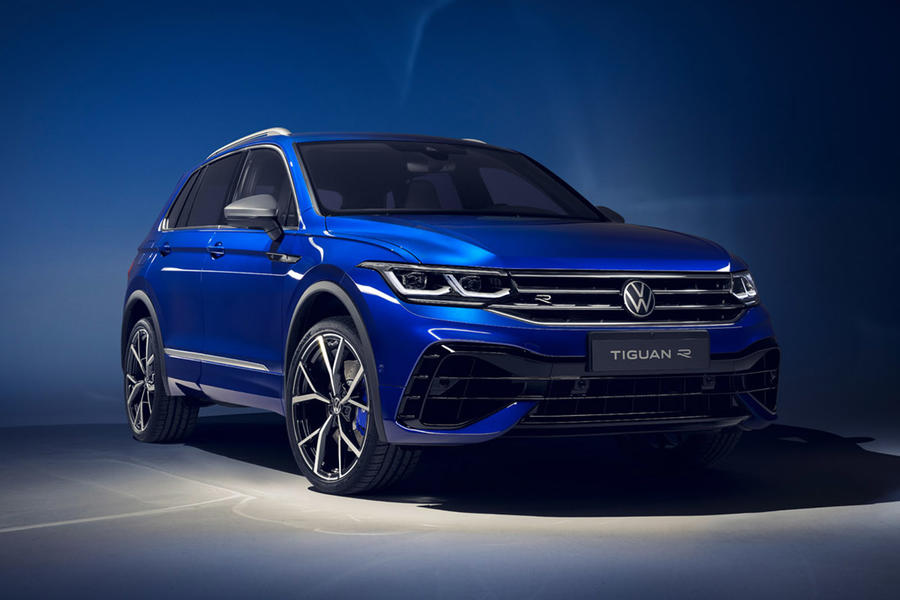 The Tiguan R also benefits from a similar torque-vectoring function in its four-wheel drive system as the Arteon R. This can vary drive between the front and rear axles as well as the left and right rear wheels.