Hyundai has updated its i30 N hot hatch with a range of mechanical and visual upgrades, including the option of an automatic transmission for the first time.

Set to begin deliveries early next year in both regular hatchback and Fastback bodystyles, the revised Volkswagen Golf GTI rival has been given updated styling that brings it more closely in line with the recently facelifted regular i30, while greater use of lightweight materials aims to improve agility.

Both i30 N variants retain the turbocharged 2.0-litre four-cylinder engine, which can again be had in two states of tune. Standard cars produce 247bhp and will be paired exclusively with a six-speed manual gearbox, while 276bhp Performance Package cars can be specified with an eight-speed dual-clutch (DCT) automatic, complete with steering wheel-mounted paddle-shifters.

The latter engine has recieved a 5bhp power increase over the outgoing car, along with a torque boost to 289lb ft, allowing for 0-62mph in 5.9sec – 0.2sec faster than the old model. Both derivatives have a top speed electronically limited to 155mph.

It’s unclear whether both engine options will be available to UK customers, because the current i30 N is offered here only in Performance guise. 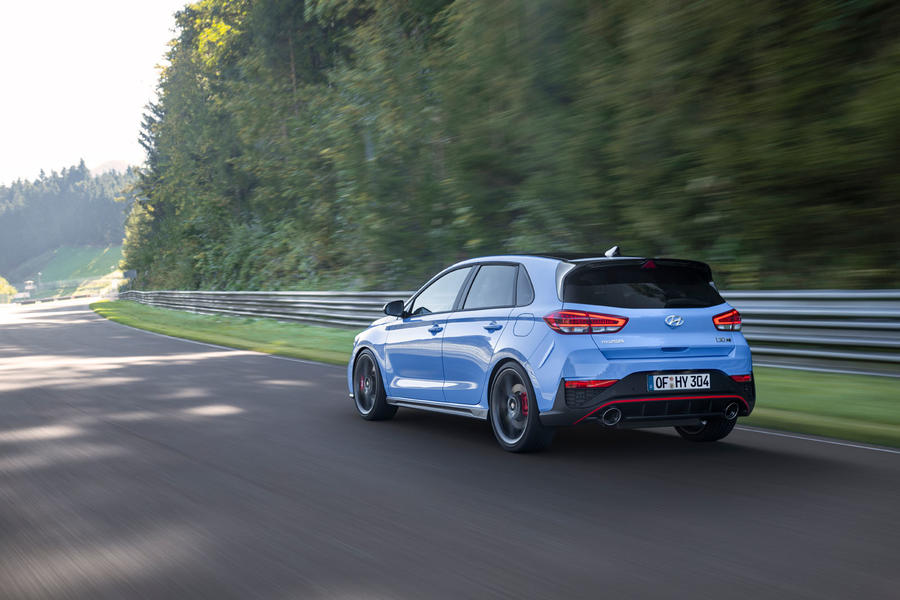 DCT-equipped cars get a new N Grin Shift mode, which provides 20sec of turbocharger overboost and maximum transmission response when activated using a button on the steering wheel. All versions retain the customisable driving modes seen in the original car, including the user-defined N Custom setting that provides greater control over engine, suspension, steering and transmission response, as well as exhaust sound.

Performance models come equipped with an electronically controlled limited-slip differential, recieve larger (360mm) front brakes and ride on newly developed 19in alloy wheels and Pirelli P-Zero rubber, which reduce unsprung mass by 14.4kg compared with the standard 18in alloys. The suspension and steering have both been retuned as a result of this weight loss.