The interior also marks a radical departure from previous Hyundai models, with a minimalist, ‘layered’ design. Hyundai has introduced new ‘Multi-Air Mode Technology’, which combines the direct and indirect air vents to reduce the space they take up and enable a gentler air flow.

The bulk of the physical controls have been removed, with the infotainment and heating controls accessed through a 10.25in vertically mounted touchscreen. There is also a 10.25in digital dashboard, configurable ambient lighting and a wireless smartphone charger.

The infotainment uses the latest version of Hyundai’s Bluelink system, including a range of connected car functions such as Last Mile Navigation, which allows owners to switch route guidance to their smartphone if they park close to their destination. 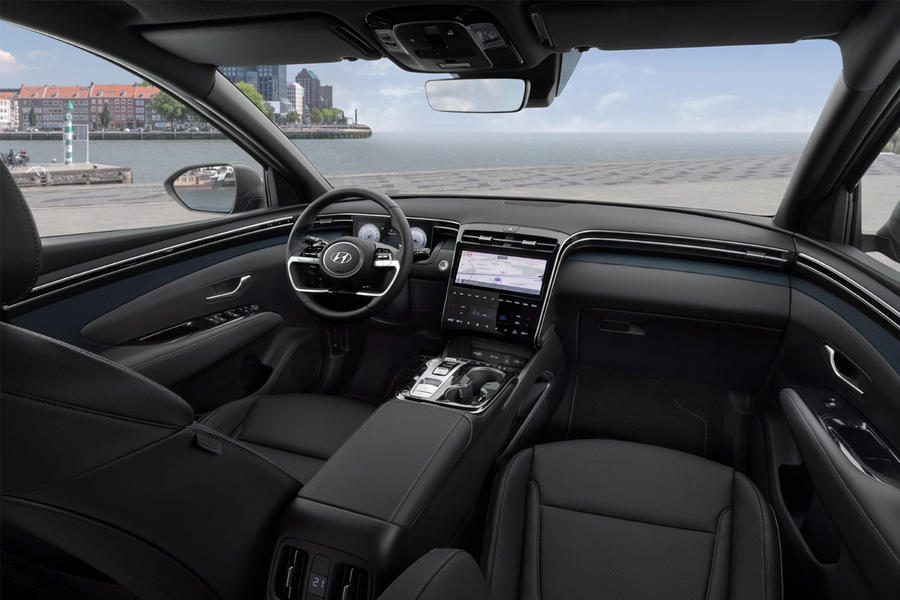 Hyundai says it has increased rear leg room. All models feature the same interior dimensions, with the batteries in the hybrid variants mounted under the rear seats.

Hyundai has also added a number of new safety and driver assistance features, including a central airbag and remote parking on the hybrid and PHEV models.

Engine-wise, the mild-hybrid petrol is offered with 148bhp and 178bhp, with the diesel producing 134bhp. Petrol units send power through a six-speed manual or seven-speed auto gearbox, with diesels using the auto. A non-electrified 148bhp petrol and 113bhp diesel will be offered, both with a six-speed manual. Four-wheel drive is optional on most powertrains.

Hyundai has also worked to improve the Tucson’s ride and handling. Vehicle dynamics engineer Julio Varela said the focus was on making it “more comfortable and fun to drive”. It is the first Hyundai outside of the N performance range to be offered with the firm’s Electronic Controlled Suspension, which includes Normal, Eco and Sport driving modes. There are three extra off-road-focused modes on four-wheel-drive variants.

European versions of the new Tucson will be built in the Czech Republic. As well as the PHEV model, an N-Line version is due next year. Pricing has yet to be confirmed, but expect a small increase over the outgoing model, which starts at £23,150.

2 hours ago
New 2022 Nissan X-Trail brings unique ePower tech
3 hours ago
Audi A6 E-tron Concept previews 2023 electric saloon
3 hours ago
Opinion: Why the A6 E-tron is an Audi that really matters
3 hours ago
Inside the industry: How luxury brands are bouncing back from Covid
3 hours ago
Used car buying guide: Citroen/DS DS3