The Audi A6 E-tron concept previews a new family of EVs that will be built on the Premium Platform Electric (PPE) architecture the firm is co-developing with Porsche, and is set to go into production alongside the existing combustion-engined A6 in 2023.

Revealed alongside the Q4 E-tron at the Shanghai motor show, the A6 E-tron concept will be the second production car from Audi to use the PPE underpinnings. It will follow the Q6 E-tron SUV, which has not yet been officially shown but which will be revealed in the second half of next year.

Unlike the performance- oriented J1 underpinnings of the E-tron GT, the PPE architecture is designed for premium-focused SUVs and lower-slung models in the B, C and D segments. Porsche will first use the PPE for the all-electric version of the next-generation Macan, which launches next year as a sister car to the Q6 E-tron.

The A6 E-tron concept’s platform houses a 100kWh battery that gives a range of more than 435 miles. The PPE structure enables the battery pack to be spread out across the chassis for minimal incursion into the cabin. This flexibility allows the platform to be used for both high- riding and low-slung vehicles “without any changes to the basic architecture”, according to Audi. The wheelbase and battery size are scalable, while the wheels are pushed into the corners to maximise both front and rear leg room. 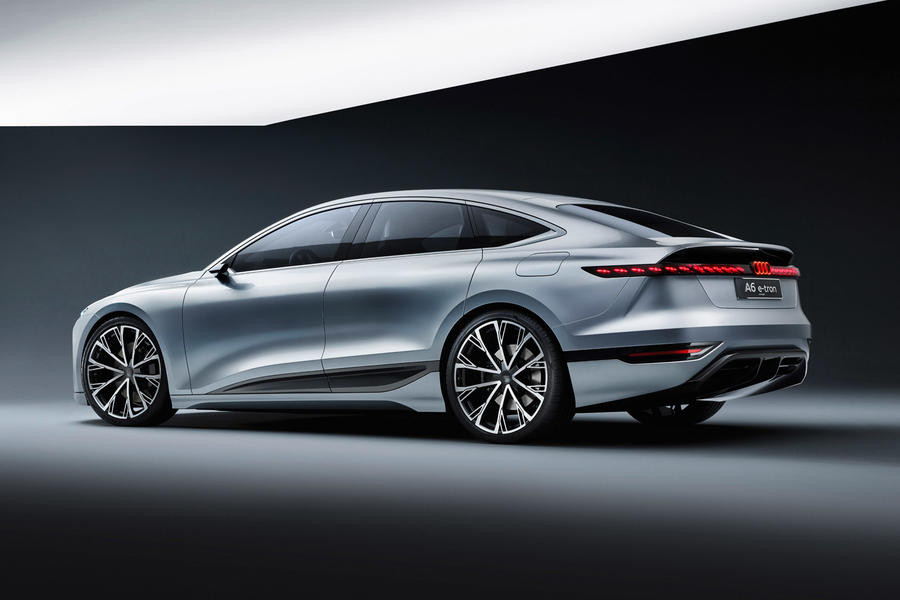 The A6 E-tron has been revealed with a motor on each axle and combined outputs of 469bhp and 590lb ft, but Audi says some PPE-based models will be offered with a single motor on the rear axle for improved range and a lower price. Like the E-tron GT and Porsche Taycan, all PPE cars will come with 800V charging capability, allowing for charging at speeds of up to 270kW – a first, Audi says, for the “high-volume mid-range and luxury segment”. The firm estimates that some 186 miles of charge can be added in just 10 minutes.

An air suspension system with adaptive dampers features and a five-link set-up “specially optimised for electric vehicles” is fitted to the front axle, and there is a multi-link axle at the rear. The most potent variants – likely to be badged RS – will accelerate from 0-62mph in “well under” four seconds, while the more efficiency-focused models will be capable of the same sprint in less than seven seconds.

Despite taking the A6 nameplate, the A6 E-tron is not immediately intended to replace its combustion-engined namesake. Measuring 4961mm long by 1960mm wide and 1440mm high, the new model is roughly comparable in size and shape to the A7 Sportback. A four-door coupé variant will be the first to launch, but the firm has hinted that the flexibility of the PPE platform means an estate-bodied version is both feasible and likely.

The concept’s design is likely to be altered slightly for production but gives clues about the evolution of Audi’s design language as the brand continues its transition to that of a maker of exclusively electric cars. Aerodynamic efficiency was a priority for the design team, in line with an overall focus on maximising efficiency. The sloping roofline, smooth side panels, low front end and sizeable rear diffuser help the sleek concept achieve a drag coefficient of just 0.22 and to appear “monolithic”, according to Audi.