A bespoke set of 18in Y-spoke wheels is also available, as are a number of optional styling upgrades from BMW’s M Sport division, such as a black front splitter and rear spoiler, carbonfibre rear diffuser and wing mirror caps, and 19in two-tone alloy wheels. 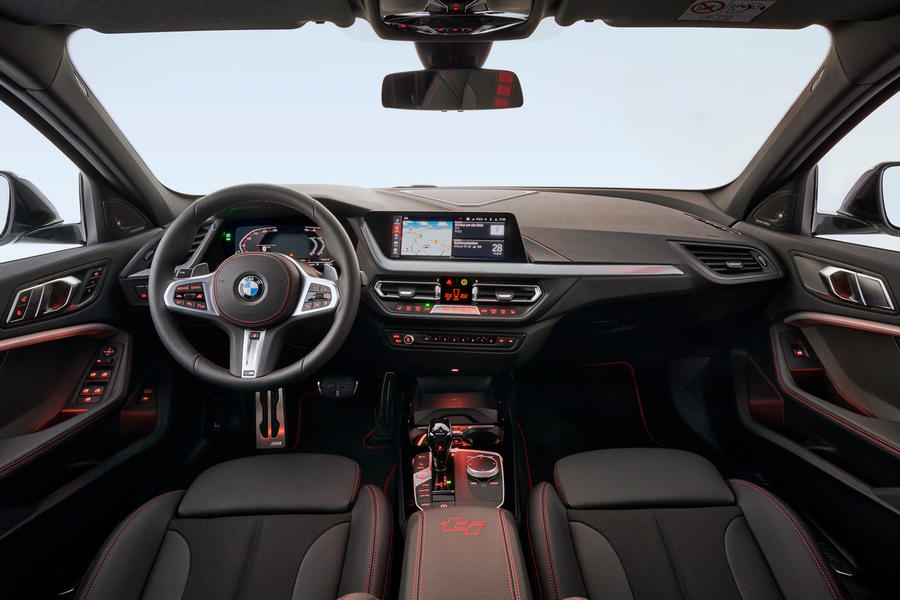 The unique colour scheme continues inside, where red accents and stitching feature as standard on the seatbacks, armrests, instrument panel and floor mats. Elsewhere, the interior is largely identical to the regular car’s, with an 8.0in central touchscreen fitted as standard and the opportunity to upgrade to a pair of 10.25in digital displays and a 9.2in head-up display.

Pricing for BMW’s new hot hatch has yet to be finalised, but a starting price of around £32,000 would place it roughly halfway between the 120i and M135i.

Why has BMW resurrected the ‘ti’ badge?

What’s the story behind the new ‘ti’ badging of this warmed-up 1 Series, then? Well, it’s another example of a brand turning to its past to benefit its future.

Standing for Turismo Internazionale (not Turbo Injection, as your mate down the pub may claim), the moniker has been a fixture on a number of BMW models, starting with the 1800ti of 1963. Launched 15 years before the Munich maker went all out with its first M-branded car (the legendary Giorgetto Giugiaro-designed M1 sports car), the 1800ti was based on the humdrum 1800 saloon but featured components developed by then fledgling tuner Alpina, including dual Solex carburettors and higher-compression pistons.

Power was boosted by about a fifth (up to a dizzying 108bhp) but crucially none of the original car’s everyday usability and reliability had been sacrificed.

33 mins ago
Polestar 1 bows out in 2021 with exclusive final edition
2 hours ago
New Maserati Levante Hybrid brings improved agility and efficiency
4 hours ago
New 2022 Nissan X-Trail brings unique ePower tech
5 hours ago
Audi A6 E-tron Concept previews 2023 electric saloon
5 hours ago
Opinion: Why the A6 E-tron is an Audi that really matters