If you’re given a present that looks like it has been wrapped by a gorilla in a force-10 gale, we’ll bet all your mince pies it was wrapped by a bloke. According to a recent survey, men spend less than a minute wrapping a present compared with the three women take getting the job just right.

Regardless of who has done it, we’ve all seen examples of bad wrapping: paper that barely covers the gift, crudely shaped ends taped roughly over the top, multiple tears where the wrap has been pulled too tightly… Examples abound, although it’s the gift that counts, of course, not how it’s presented.

But what if the gift in need of wrapping is larger and more challenging? A car, for example. Anybody who gives a motor as a gift rather than saving it for themselves needs their head examining, but if they’re going to do it, it would be nice if they wrapped it properly.

Which is where Autocar’s Christmas car wrapping guide comes in. We’ve put it together with the assistance of our friends at Creative FX of Bromley, Kent. Sean, the boss, and his team usually spend their days wrapping Lamborghinis and the like in stretchy vinyl. We showed you how they do it a couple of years ago. This time, however, they’re going to wrap a more modest Mazda MX-5 in Christmas gift paper, which, rather than stretching, will simply tear or crease with little warning. This should be fun… 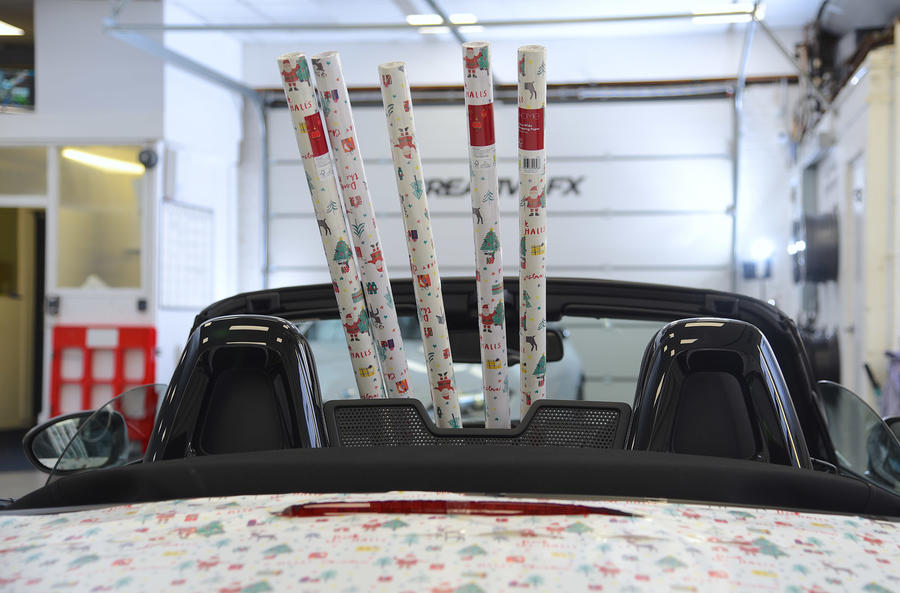 Following a quick planning chat, the FX guys set to, laying down lengths of paper on the Mazda and trimming them expertly along the panel gaps in a well synchronised fashion. Being clueless about wrapping, we had brought no fewer than 16 rolls of paper and four rolls of Sellotape to the project. In the end, the FX team needed barely three rolls of paper and one of tape. They all agreed the paper’s design was very forgiving in the way any creased bits could be masked with fresh paper – a point worth remembering when you’re choosing your wrap. We agreed not to wrap the roof and, instead, lowered it. We left the windscreen alone too.

The whole job took around an hour. By the end, the car was still clearly a MX-5, but the point had been made: it had been wrapped with loving care. No crinkly triangles, no tears and no scrappy lengths of surplus tape.

And if anyone fancies trying this at home, we’ve got loads of unused wrapping paper going spare…

How to wrap a Mazda MX-5

You will need the help of at least one assistant. Make sure your modelling knives are super-sharp and always cut or trim between panel gaps. Any serious creases can be disguised with a covering of fresh paper trimmed to fit. The steps we describe should work for most cars.