This is entrepreneur Tej Kohli, and he’s giving us a peek into the ‘fraternity’ of rich hypercar fans

Some people have a fish tank in their home; Tej Kohli has a car tank. The spotlit, part-glazed extension holds five of his most precious motors: a Ferrari 430 Spider, a Bugatti Veyron Grand Sport Vitesse, a Rolls-Royce Ghost, a Rolls-Royce Dawn and a Pagani Huayra. The Pagani is Kohli’s favourite, which is why it’s illuminated from above by a large, sparkly light panel.

In the garage block next door is a Rolls-Royce Phantom EWB and a Morgan Aero Supersports. Outside, in front of Kohli’s magnificent Henleyon-Thames home, with its manicured lawns, tennis court and curling gravel drive, sits a Bentley Mulsanne EWB and an Aston Martin DB11, finished in eye-popping Cinnabar Orange. Beside it is his son’s Tesla Model S, an 18th birthday gift. Out of sight, in pride of place in Kohli’s office, is one of two Aston Martin DB9s that he owns.

But enough of these dream wheels. What does Kohli – evidently a very rich man (although he won’t reveal exactly how rich), with still more cars elsewhere, including a Lamborghini Gallardo at his Marbella home plus three Mercedes-Benz S600s at his place in his native India (“they would attack me if I drove a Ferrari or a Lamborghini”) and a private jet at Farnborough – think of my 181bhp Mazda MX-5 2.0 Sport Nav+ convertible, finished in Machine Grey, parked next to his DB11? 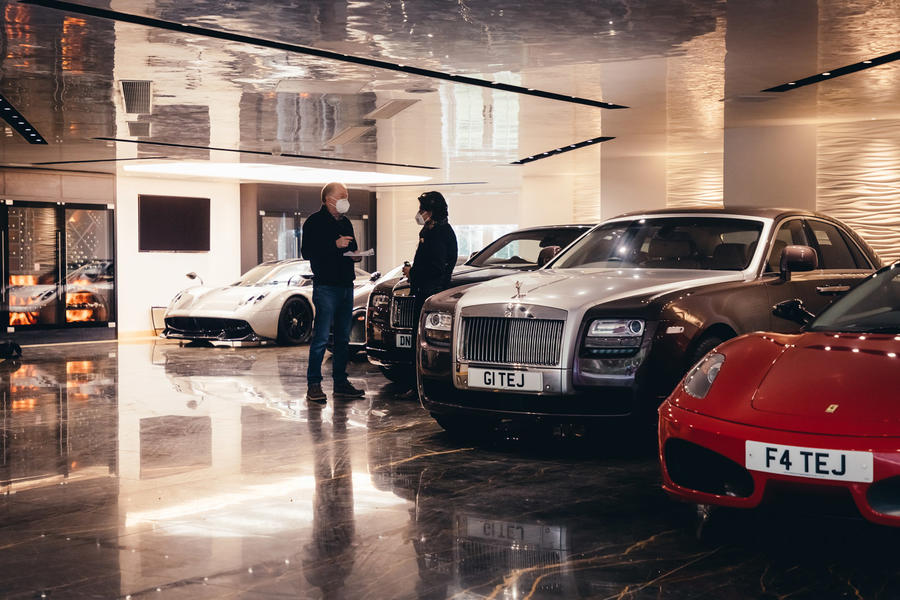 “It doesn’t turn me on,” he says simply. “It has no power. We all started out owning cars like this, but we’ve moved on, and the fraternity is at a very different stage in their lives now.” That will teach me to fish for compliments. But hold on: what’s the fraternity? It turns out this is Kohli’s name for the bunch of car-mad billionaires who he hangs out with. According to him, they’re a rung or two above the Ferraristi and their ilk. “Members of the fraternity are much more discreet and don’t easily follow other people’s rules,” he says. “For example, we would never draw attention to ourselves by driving in convoy or book a track day to be told how fast we can go. Too boring!”

Google Kohli and you will discover, among other things, that he describes himself as a “technologist and investor who backs ventures in the fields of artificial intelligence, robotics and biotechnology”. His Tej Kohli Foundation is a non-profit organisation that’s “committed to developing scientific and technological solutions to seemingly intractable human problems”.

Still, I’ve not been invited to Kohli’s home to dwell on any of this, rather to hear about his cars. Before he will meet me, I must submit to a Covid-19 test (before I arrived, Kohli’s chauffeur scored a positive and was sent home). To my horror, I realise that I’m to perform it myself. An assistant hands me a probe in a sealed bag with instructions to open it and insert the slender device deep into each nostril, “up to the wide part or it won’t be effective”. I do as instructed, tears instantly pricking my eyes.

Fortunately, my suffering isn’t in vain. Within minutes, I’m given the all clear and Kohli, a trim-looking 63-year-old, appears, keen to talk cars. In fact, he had initially wanted to write a piece for Autocar comparing his Huayra and Veyron. But as we talk, it’s clear that the Pagani would have won. 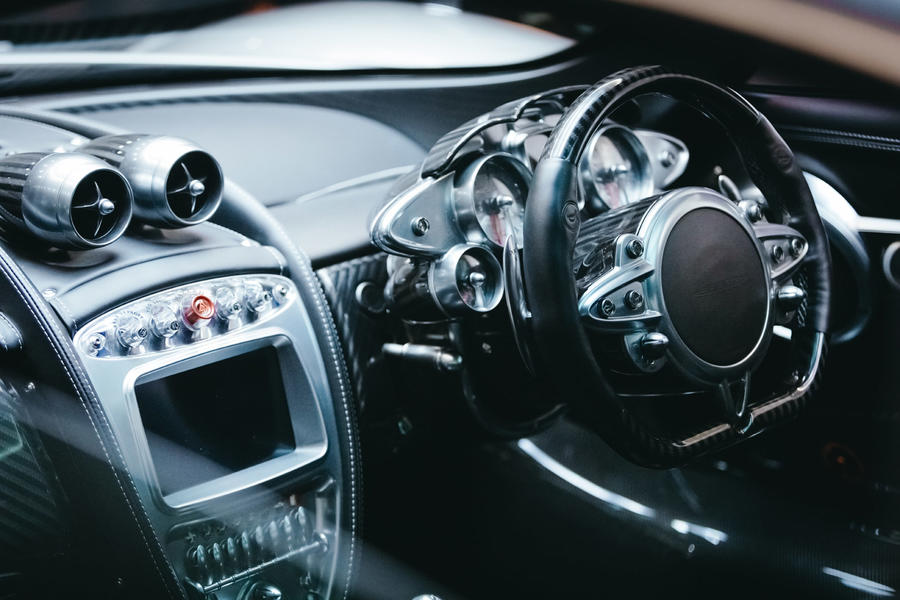 “I love power and good looks, and the Huayra has both in abundance,” he says. In fact, I’m often in contact with the company’s directors – but then there are many car maker CEOs in the fraternity, so that’s not unusual. Like the rest of us, they just love to meet up and talk about cars.”

He wants me to see the Huayra, so we move from his vast conservatory, through his large den with a huge wall-mounted TV playing Formula 1 races on a loop and into the car tank. Kohli busies himself opening every door and cover of the seven-figure Italian hypercar, before inviting me to sit in the driver’s seat and start it.

Its owner beams as its Mercedes-AMG twin-turbocharged V12 roars into life. Kohli says he drives the Huayra only occasionally. Very occasionally, I think he means, since it has done less than 1000 miles. Indeed, his other exhibits in the tank have done only 2000 apiece. Does this lack of familiarity explain why he can’t tell me what the Huayra’s optional Pacchetto Tempesta package (£150,000) includes and is unsure which model the Ferrari is at the far end (he settles on a 456, but it’s actually a 430)? In fact, I suspect it’s because he’s a tad impulsive and simply buys the best that he can afford without worrying too much about the details.

Where does Kohli buy his cars? Not from dealers but at the Geneva motor show, apparently: “My wife and I fly there in my jet and stay for two days. All the CEOs know I’m coming. We meet and they tell me what’s new. I bought my Dawn at Geneva.”

Servicing them is a sore point, though. For example, his Veyron targa-top’s annual workshop bill is £25,000. “That’s bad enough, but Bugatti says I must replace the tyres every 12 months, and they cost £8000 each. I refuse,” Kohli says. In fact, the tyres are meant to be reglued to the wheels every 18 months and the wheels themselves replaced every three tyre changes, but he’s in no mood to quibble. 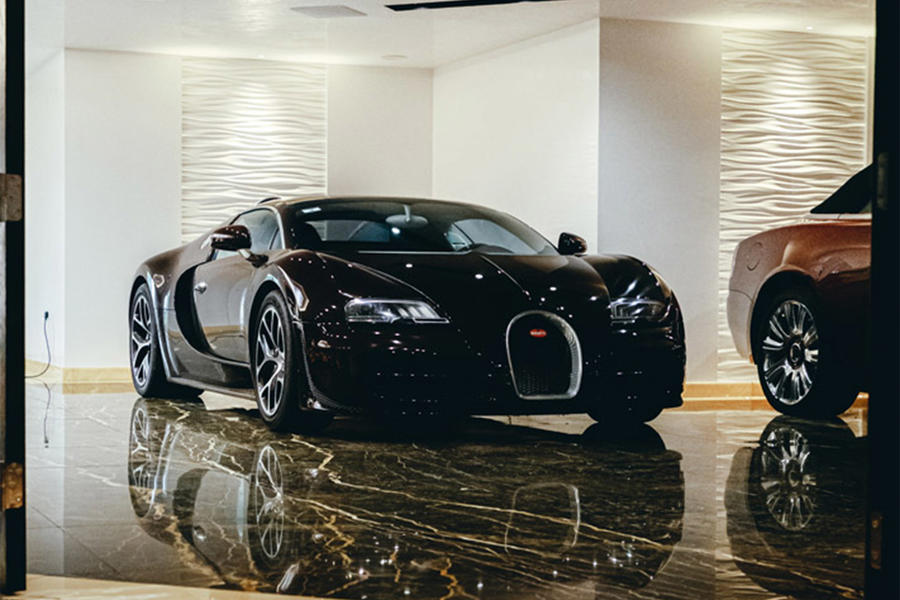 As for driving his supercars in the manner that their makers intended, Kohli says opportunities in the UK are non-existent (“I don’t want a ticket”), so instead he goes abroad, where he can drive his Ferrari and Lamborghinis on derestricted sections of autobahn or call in a favour within the fraternity to borrow a Bugatti for an unrestricted blat.

My time is up; Kohli must return to his desk. Before he does, however, he wants to show me something in his den. It’s a simple wall calendar whose colour portraits of supercars can be removed and swapped around between the months. He seems genuinely delighted with this modest gift from a high-end car maker. It may not have cost £1 million, but clearly to this very rich man, some things are priceless.

Kohli on his favourite cars

Bugatti Veyron: “A friend invited me to an exclusive Bugatti summer party in 2007. I didn’t own a Bugatti, but he said he would take me in his. While I was there, sipping champagne and admiring the cars, a Bugatti person asked me if I would like to have a ride in a Veyron. ‘Of course,’ I said. It blew my mind, and a few years later I was able to drive to the summer party in my own Grand Sport Vitesse.”

Pagani Huayra: “This is my favourite car. Most people who say they have a Pagani have a Zonda. Very few have a Huayra and fewer still one such as mine with the Pacchetto Tempesta pack. It’s a beautiful car and very powerful, but you have to be careful. I once took a friend out in it and she asked: ‘What does that switch do?’ I didn’t know, but I pressed it anyway. The car rose a few inches and became very unstable. I quickly pressed it again!”

Aston Martin DB11: “I bought my DB11 at the Geneva motor show. It was the first one that Aston Martin sold. I was bowled over by the looks, the technology, the features and the performance. In contrast, my two DB9s have very dated infotainment systems, but they feel smoother than the DB11, which is quite extreme.”

LaSource: The supercar broker that deals in unicorns

Behind the scenes at California’s ultra-exclusive race track