However, there’s no denying the sheer second-row capaciousness of either car. If you’re three- or four-up with any regularity, your passengers will thank you for having one of these crossovers instead of either the Golf R or AMG A35. And that’s strike one.

Equally undeniable is the pace of the Volkswagen, which not only has that 99kg weight advantage over the Mercedes but with 310lb ft also makes more torque, and makes it earlier on, from a scant 2100rpm.

To make the most of the drivetrain, you need to get the car into either Sport or Race mode, at which point the piped-in noise sounds, in the poetry of fellow road tester James Disdale, “like a Subaru flat four with a manifold leak that’s been sampled through a ZX Spectrum”. But boy is this thing quick. What becomes apparent is that rather than creating a unique character for the Tiguan R, Volkswagen has attempted to transplant into it the personality of the Golf R wholesale. It means that as well as being relentlessly accelerative, this crossover is also more agile and direct than you’re probably expecting, and the body control enabled by the standard-fit adaptive dampers is uncanny. What also helps is the new R Performance torque-vectoring set-up, which sandwiches the rear differential with electromechanical clutch packs that siphon drive from wheel to wheel – potentially all of what the driveline can make available to the rear, which at any given moment is half the engine’s total output. This ability to bias the outside rear wheel works alongside the front axle’s XDS ‘differential lock’ system, which is nothing of the sort but can if necessary use the ESP to brake the inside wheel during hard cornering.

And the result? The Tiguan doesn’t corner with much in the way of flair, as the Golf R can (strike two – sorry) but it does stay doggedly neutral and on your chosen line, seemingly no matter what you throw at it. You simply point its bluff nose in the desired direction and there it goes, like a salivating bulldog chasing after its favourite fang-punctured toy. 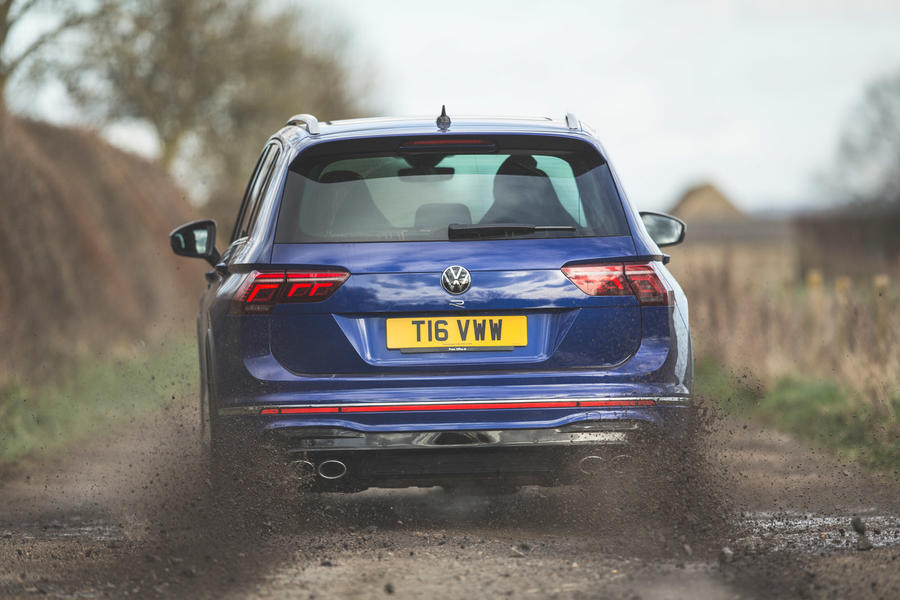