Hyundai has confirmed it will launch the first model of its new fully electric sub-brand, Ioniq, in the early part of next year.

An “early 2021” reveal date for the model, which is then expected to be in showrooms by the middle of the year, is promised. Called the Ioniq 5, it’s the first of three EVs set to fall under the Ioniq umbrella in the next four years.

Each will use a numerical naming strategy similar to Volkswagen’s ID line-up. Odd numbers will be used for SUVs and even numbers for saloons and other models.

The 2021 Ioniq 5 will be a compact crossover based on the radical 45 concept from last year’s Frankfurt motor show. New details of the car confirmed by Hyundai include three ‘extras’ it will launch with. The first is vehicle-to-load (V2L) technology – bidirectional charging which allows owners to us the car’s batteries to store energy and then discharge it back to the national grid, or the home, when it is required during peak demand times.

The second is fast-charging capability, although the Korean firm is yet to detail the exact speeds the car is capable of, while the third is the car’s “soon-to-be-announced array of features”. 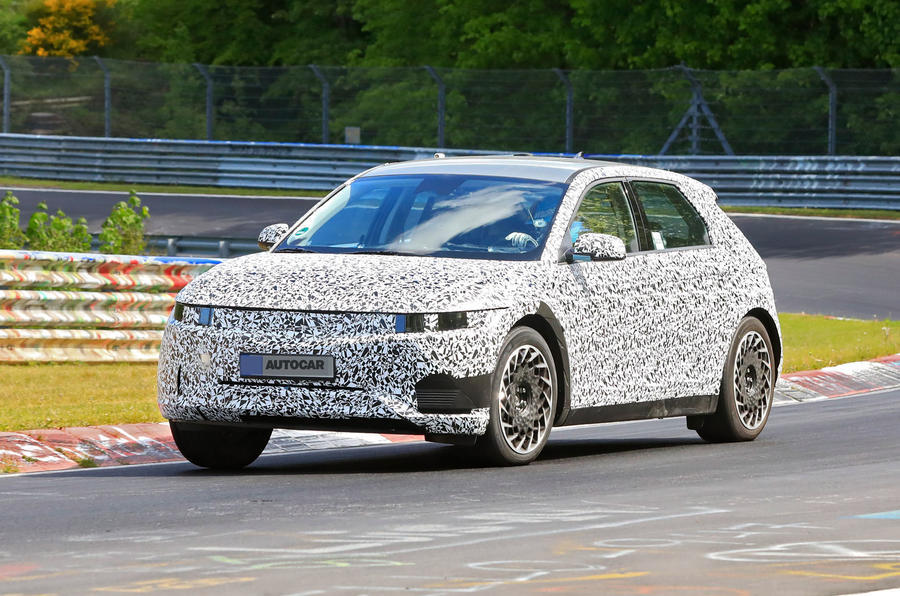 The Ioniq 5 will be followed in 2022 by the Ioniq 6 electric sports saloon, which will take cues from the low-slung Prophecy concept. A large, as-yet unseen SUV called the Ioniq 7 will land in 2024.

The final production designs of all three remain under wraps. However, Hyundai has previously said it plans for each to have a distinctive and different design, but they will all feature pixel headlights, as seen on the 45 and Prophecy concepts.

Each will sit atop the brand’s all-new Electric Global Modular Platform, which is said to be capable of fast charging and a long range. With a long wheelbase and a flat floor, it also allows for each model to have a spacious interior, which, Hyundai says, will be modelled on “smart living rooms”.

The brand also says all Ioniq-branded models will offer enhanced connectivity features “to integrate in-car and out-of-car experiences for a seamless journey”.

The Hyundai Ioniq will not form part of the new model range, suggesting it will either be renamed or replaced entirely.

By 2025, Hyundai intends to launch 16 new EVs to increase its annual EV sales to more than half a million – the equivalent of just over 10% of its total sales in 2019. As a whole, the Hyundai Motor Group is aiming to achieve a 5% global automotive market share and transition to a ‘smart mobility solution provider’, rather than purely a car manufacturer.

50 mins ago
New Maserati Levante Hybrid brings improved agility and efficiency
3 hours ago
New 2022 Nissan X-Trail brings unique ePower tech
4 hours ago
Audi A6 E-tron Concept previews 2023 electric saloon
4 hours ago
Opinion: Why the A6 E-tron is an Audi that really matters
4 hours ago
Inside the industry: How luxury brands are bouncing back from Covid