The maker’s first electric model will deliver 141bhp and 195lb ft from an electric motor powered by a 35.5kWh battery, offering a range of 130 miles. This is far less than many rivals, such as the 279-mile Hyundai Kona Electric, but Mazda says it exceeds the 31-mile average daily drive of European customers.

Mazda added that it has chosen a smaller battery to achieve better emissions through the entire lifecycle of the car. Its research has found that a 35.5kWH battery produces fewer lifecycle emissions overall than a petrol-powered Mazda3 or an EV using a 95kWh battery (as the Audi E-tron) does.

Christian Schultze, Mazda Europe R&D boss said: “We should not be excessive with battery size. We should consider how much range does a customer really need and how much battery [capacity] can we avoid to reduce CO2 substantially?” 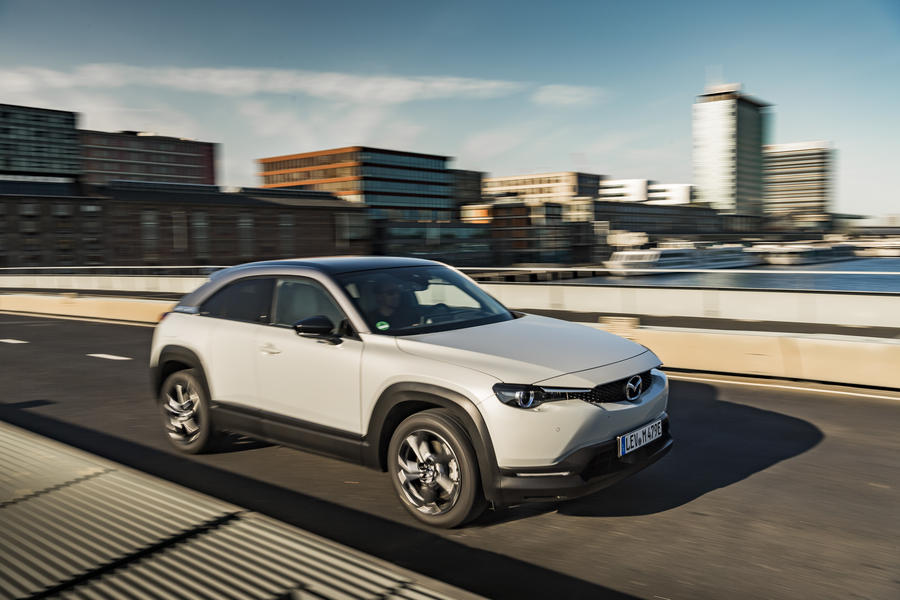 There are no plans for a higher-powered or higher-range flagship MX-30, project manager Takeuchi-san told Autocar.

Mazda has chosen to differentiate the MX-30 from other EVs in a number of driving characteristics. For example, it has less regenerative breaking than many EVs – eschewing the popular one-pedal driving style – and also more progressive acceleration.

Schultze says: “For strong deceleration, we think the brake is better because it moves in the direction of our body. It has the same efficiency as the one-pedal of other EVs but has human advantages.”

It has also introduced an artificial sound which is intended to imitate the sound variations heard in an internal combustion-engined car as torque is applied. Mazda told Autocar it is still deciding whether to offer a silent option, which would be controllable by a switch in the car.

The crossover, unveiled at last year’s Tokyo motor show, sits on a platform derived from the new architecture used on the Mazda3 and CX-30, but with increased ring structures around the battery and floor in order to achieve a “super stiff and fast-reacting body,” said Schultze.

It employs an enhanced version of Mazda’s G-Vectoring control system called e-GVC Plus, which “leverages the torque characterisitcs of the electric motor to optimise the front-rear load shift under an even wider range of usage scenarios,” said Mazda. The electric motor allows for more minute torque control than an engine, Schultze explained.

35 mins ago
Polestar 1 bows out in 2021 with exclusive final edition
2 hours ago
New Maserati Levante Hybrid brings improved agility and efficiency
4 hours ago
New 2022 Nissan X-Trail brings unique ePower tech
5 hours ago
Audi A6 E-tron Concept previews 2023 electric saloon
5 hours ago
Opinion: Why the A6 E-tron is an Audi that really matters