MG is gearing up for an ambitious growth plan that it hopes will generate annual sales of up to one million cars by 2024 – the formerly British company’s centenary year.

Key to this growth target, which is more than triple MG’s global volume in 2019, will be a number of new and refreshed models, including an electric sports coupé designed to serve as a brand-boosting halo car from its launch in late 2021.

At the other end of the MG range, Autocar has learned, will be a new, value-focused electric supermini destined to become a significant volume grower in several European markets (see box on page 7).

It is hoped that both models will help MG, which is owned by Chinese car-making giant Shanghai Automotive Industry Corporation, to become known more as an international brand with global reach, according to SAIC vice-president Yang Xiaodong.

The as-yet-unnamed new two-door, four-seat flagship is conceptually based on the MG E-Motion concept that was revealed at the Shanghai motor show in April 2017. At the time, MG product planning boss Zhang Liang told Autocar that the concept would be produced if reactions were positive.

Despite various external domestic and global factors, including a market downturn in China and the wide-ranging disruption of the coronavirus pandemic, work on the E-Motion continued. And in June this year, patent images of the production version (which must be submitted prior to any car’s homologation for sale in China) were leaked online. 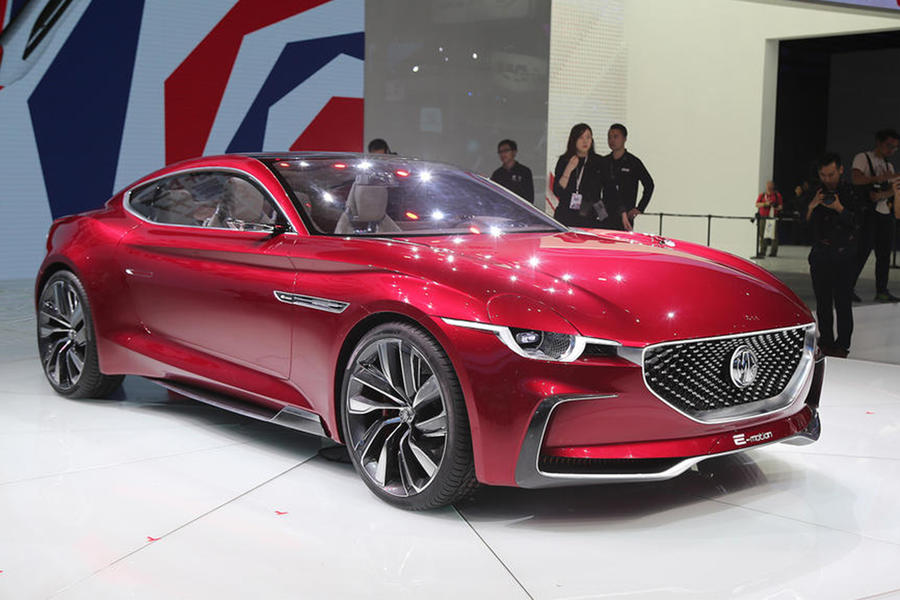 The patents reveal that the design has evolved noticeably from the E-Motion concept, although its basic shape remains. The current MG family ‘face’ that the concept featured has been evolved into a sportier shape somewhat reminiscent of an Aston Martin’s, while the glasshouse appears to have risen to make the two-door more accommodating.

The wide rear haunches and sloping rear end remain, but some concept details, such as the butterfly doors, aren’t expected to make production.

Technical details remain scarce. We do know, however, that the car utilises SAIC’s own modular electric architecture and a twin-motor, four-wheel-drive powertrain.

MG’s original ambition for the E-Motion to deliver a 0-62mph time of less than 4.0sec is likely to be realised, although it remains to be seen if the production car can achieve the previously promised range of over 300 miles. For context, the 44.5kWh battery pack in MG’s ZS EV electric SUV results in an official 163 miles per charge.