As with the Golf and Octavia, the new infotainment system introduces features such as natural speech recognition, gesture control, real-time information via an embedded SIM card and an overhauled sat-nav system. The Leon is also ready for Car2X connectivity, which enables drivers to receive a warning of hazards ahead from other cars.

Further useful technology that’s new to the Leon includes USB-free Apple CarPlay, wireless smartphone charging and the new Seat Connect app, which provides remote access to driving data, can lock and unlock the doors, sends an alert if the car has been stolen and can sound the horn. On plug-in hybrid models, it also allows you to manage the charging process and condition the interior before you set off.

Like its MQB siblings, the Leon has a shift-by-wire gear selector for its automatic gearbox, freeing up space on the centre console. The most interesting new feature inside, though, is a lighting strip that spans the dashboard and both front doors. Complementing the LED ambient lighting, it also changes colour in accordance with features such as blindspot monitoring. As expected, the suite of active safety systems is enhanced to include predictive adaptive cruise control, traffic sign recognition and more advanced emergency lane-keeping assistance.

Unsurprisingly, the Leon’s engine range mirrors those of the Golf and Octavia. Four turbocharged petrols (two with the option of 48V mild-hybrid technology) and two diesels will be offered, alongside a petrol-electric plug-in hybrid.

The petrol range begins with a 1.0-litre three-cylinder unit that produces 109bhp. It comes with a six-speed manual gearbox or, in mild-hybrid form, a DSG dual-clutch automatic. A 1.5-litre four-cylinder motor is available in 129bhp and 148bhp forms, with the latter offered as a DSG-equipped mild hybrid. The 187bhp 2.0-litre comes with a seven-speed DSG only. 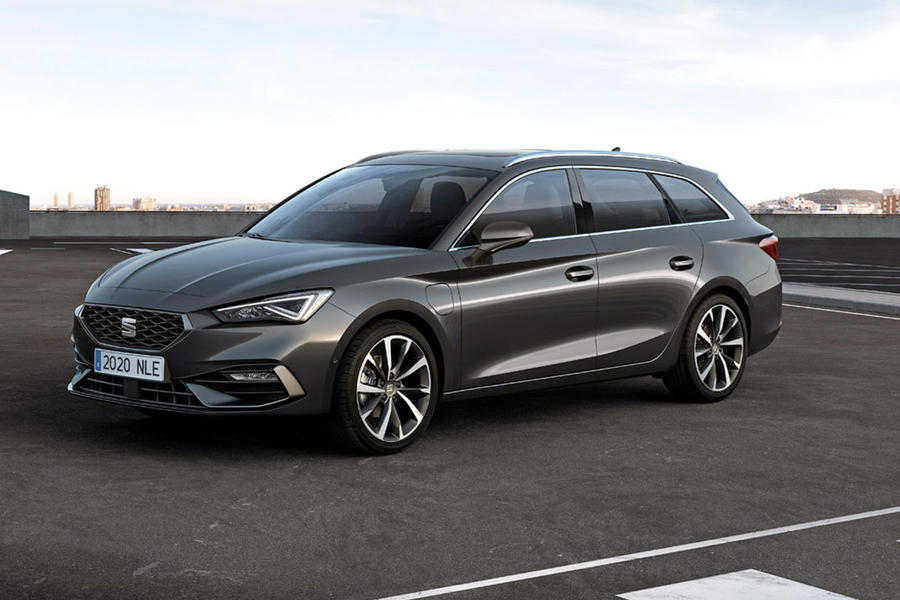 But it’s the Leon eHybrid that’s the biggest story. This mates a 1.4-litre turbo petrol engine with an electric motor, a 13kWh battery pack and a six-speed DSG. Making 201bhp (no torque figures are quoted), it’s claimed to have a 36-mile electric-only range, with a full charge taking just over three hours from an AC charger. This powertrain will be available in both the hatchback and estate.