Hyundai will be making the most of the “design revolution” of its new Tucson by launching a more sportily styled N-Line variant in 2021.

The first variants of the new family SUV are due to arrive before the end of the year and the N-Line will be added in the spring. It promises “aggressive and distinctive exterior design features and differentiating interior details” over the standard Tucson.

No technical details have been provided for the Tucson N-Line, but expect it to be available with the higher-end engine options. It’s possible that Hyundai will revised the spring and damper rates for a sportier feel, too.

What’s also not clear is whether the N-Line serves as a preview for a range-topping N performance variant coming later on. Hyundai describes N-Line as “an entry level to the N high-performance brand”, while a hot Tucson has been rumoured for a few years.

We know that an N version of the smaller Hyundai Kona will arrive next year, but we’ll have to wait to see if its larger sibling receives the treatment to go up against the Cupra Ateca.

The fourth generation of the Korean firm’s worldwide best-seller will go on sale with a line-up of 1.6-litre four-cylinder petrol and diesel engines, most featuring 48V mild-hybrid technology, and a 227bhp 1.6-litre T-GDi hybrid.

A turbocharged plug-in hybrid version will follow next year, although Hyundai has yet to give performance details.

The latest Tucson features a bold new front grille with what Hyundai calls Parametric Hidden Lights built in. Effectively, the LED headlights and “jewel-like” running lights are integrated into the sides of the grille and can’t be distinguished from it when turned off. The grille features 3D parametric graphics, which are used as highlights elsewhere on the car. 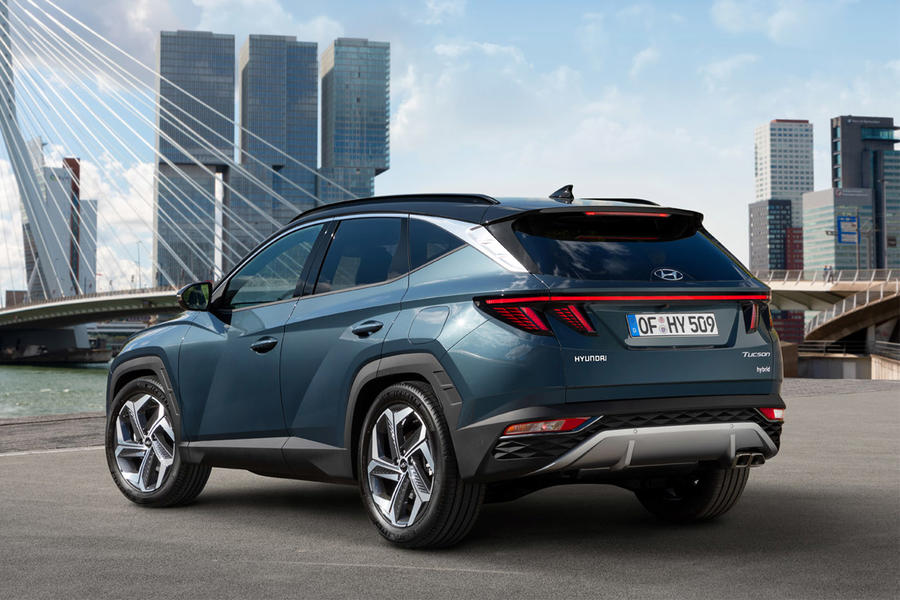 Side on, the angular theme continues, while at the back, the window wiper is hidden in the roof-mounted spoiler – a first for Hyundai – with the brand’s logo set into the bottom of the rear windscreen.

At 4500mm long and 1865mm wide, the Tucson is 20mm longer and 15m wider than before, with the 2680mm wheelbase stretched by 10mm. Although two wheelbase versions will be built, only the shorter variant will come to the UK. Buyers can choose from 17in, 18in and 19in wheels and two-tone colour combinations.

Eduardo Ramirez, Hyundai Europe exterior designer, described the new Tucson’s design as “quite brave”. He added: “We’re experimental, always trying to find a very distinctive character in design. Although that doesn’t mean we’ll apply the same formula to every car.”