Dacia’s Sandero and Sandero Stepway superminis have entered their next generation with a new platform, an updated design and revised engines.

The Romanian-produced Sandero, one of Europe’s most affordable and best-selling cars, has been redesigned to offer “more modernity, roominess and versatility”.

Along with revamped front- and rear-end styling featuring new Y-shaped LED signatures, the hatchback’s roofline has been lowered by 1cm, its track widened and its wheels made to sit flush with their arches. The ruggedly styled Stepway variant sits 41mm higher than the standard car, courtesy of its larger tyres, and features offroad-inspired styling elements including flared wheel arches, roof bars, plastic body cladding and body-coloured skidplates at its front and rear ends.

Dacia has also overhauled its Logan saloon, but that won’t be sold in the UK. Its estate-bodied Logan MCV sibling, which is likely to return to Britain, has yet to be shown in its new form.

The Sanderos and Logans all now sit atop Dacia parent firm Renault’s CMF-B platform. Shared with the latest Clio, this is said to reduce weight while improving ride quality, handling characteristics and safety.

Each new model is available with a turbocharged 1.0-litre three-cylinder engine paired with either a six-speed manual or new CVT gearbox. In addition, Dacia will continue to offer this unit with its Bi-Fuel LPG option in the UK.

The new Sandero can also be specified with a naturally aspirated 1.0-litre petrol engine with a five-speed manual ’box. Official efficiency figures have yet to be detailed, but Dacia promises reduced CO2 emissions across the ranges. 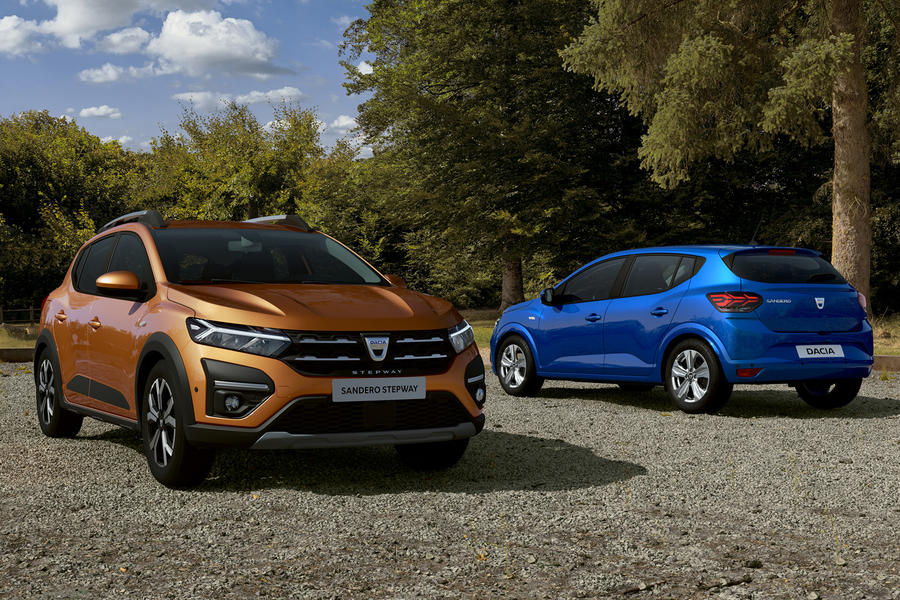 The models hold true to Dacia’s view that “modern cars shouldn’t be filled with nonessential features”, although their interiors receive more supportive front seats and a shorter gearstick, plus new standard features including a phone holder, cruise control and automatic headlights.