Renault has revealed the Mégane eVision, a bold electric concept that it claims “reinvents the classical hatchback” and closely previews a final car due to go into production at the end of 2021.

When it arrives it will not immediately replace the Megane, with the firm revealing a combustion-engined Megane (likely an updated version of today’s model) will remain on sale for some time after the EV’s launch.

Although it takes its name from Renault’s long-running Ford Focus rival, the concept is an all-new design built on the Renault-Nissan-Mitsubishi Alliance’s electric CMF-EV platform, which is also used for the Nissan Ariya large SUV.

The Mégane eVision appears to share several styling features with the Ariya, but its design is heavily based on the recent Renault Morphoz concept. New Renault boss Luca de Meo commented at the model’s reveal today: “The car looks very futuristic but it is 95% what the production car will look like.”

De Meo said the company “fully leveraged the potential of a pure-electric platform to reinvent the classical hatchback in an emotional way”. He continued: “The Mégane eVision reinvents the Mégane and Renault reinvents Renault. This is just the beginning; a whole new generation of innovation-packed EVs is to come. A family of vehicles will be based on the CMF-EV platform – to date more than 300 patents have been filed.”

The Mégane eVision features what Renault terms ‘slimline’ batteries, which are built into the structure of the CMF-EV platform. As is standard for an EV, the batteries are mounted under the floor. De Meo said the batteries are 11cm high, claiming this makes them “the flattest in the market”. He added: “It allows us to give [the concept] a sporty look and achieve very competitive aerodynamics.” 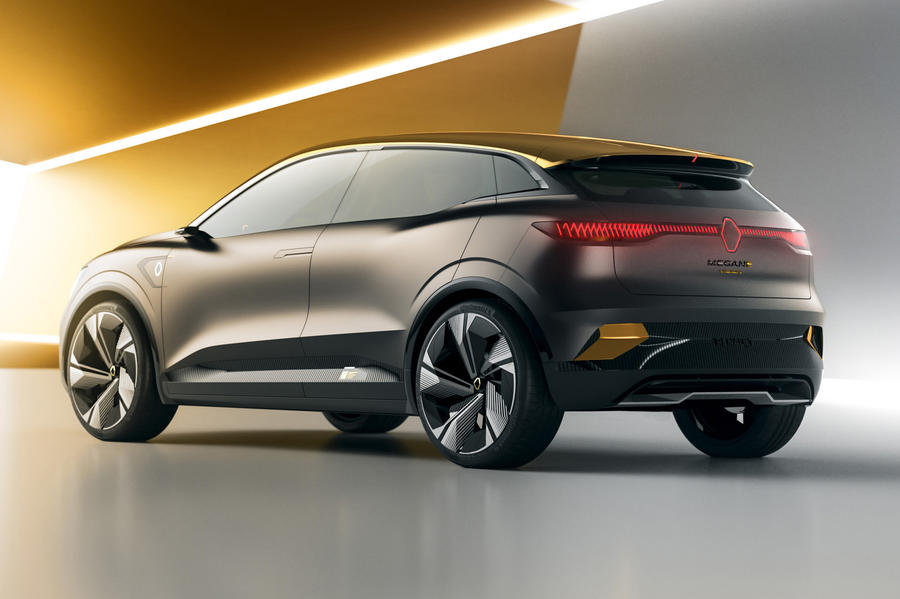 The concept has a 60kWh battery that can be fast-charged at rates of up to 130kW. De Meo claimed the car is capable of a range of 280 miles on WLTP. He added that there was “potential” to achieve a higher range in future. The 63kWh unit in the closely related but larger Ariya yields a range of around 223 miles.

The electric motor produces 215bhp and 221lb ft with power sent to the front wheels, so Renault claims a 0-62mph time of less than 8.0sec.