I suspect it’s me, and I reckon I know what the issue is. In that counterintuitive way often found with racing cars, the way to stop it sliding around and make it behave itself is to drive it faster, not slower. And then, almost at once, it makes sense. Heat builds in the brakes and they start to work, while the giant Michelin slicks reach their operating window and, in an instant, switch on. Air flows faster over and under the car, that gargantuan aero package starts to do its thing and I’m away. By the time I come back in, I’m grinning like a loon.

So they give me four more laps and finally I take Bruni at his word. The power still isn’t amazing, but the gearshift could have come from a Rolls-Royce it’s so smooth. At speed and with the wings working, there’s no amount of force my left leg can exert that can bring the tyres even close to locking up.

But all that is as nothing compared with the way it gets into a corner. It’s so stable that the entire entry phase is also a deceleration zone. I can stay hard on the brakes until I need to bleed pressure away to account for the diminishing downforce and then tread as hard as I like on the throttle, knowing that the electronics will keep me balanced right on the traction limit all the way to the exit. I’ve driven plenty of GT3-category racing cars but nothing that felt like this. 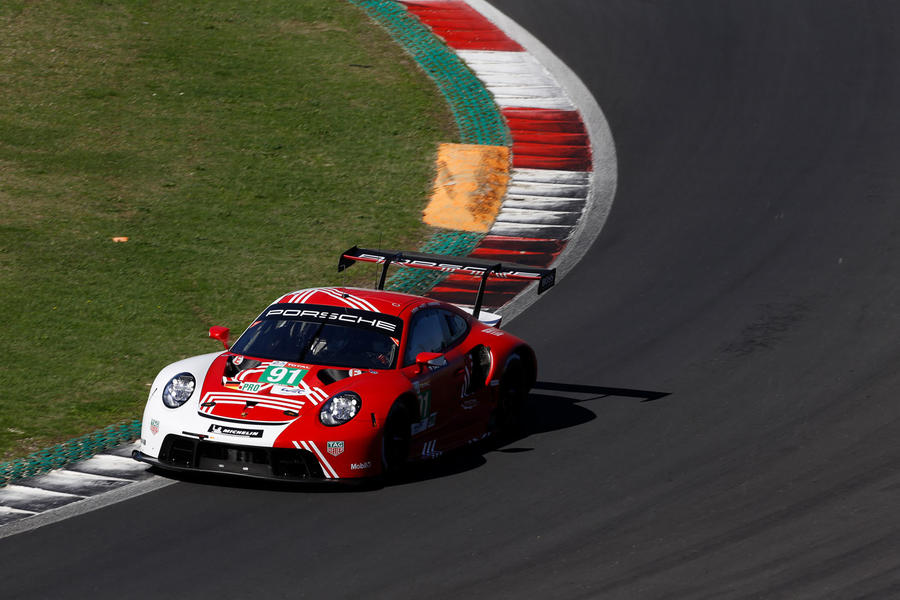 If I have a criticism of the RSR-19, it’s that it’s simply too good to be hilariously good fun to drive. Maybe if I drove like Bruni drives, it would keep me very busy indeed, but the car is so technically accomplished, so sophisticated in the way that it uses its downforce and traction control that it felt more like I was witnessing an extraordinary demonstration than a relationship of equals.

And that isn’t surprising. The RSR-19’s job isn’t to entertain its driver but to put him or her in a position to extract the best possible lap time, which is a very different thing. If you want driver involvement, you can spend less than one quarter of this money on a new 911 Cup, which doesn’t even have much less power or much more weight but comes without driver aids or much downforce. And here a properly wild ride awaits.