A 1959 advert for the new Rolls-Royce Silver Cloud II carried the line: “What makes Rolls-Royce the best car in the world?” Apparently, the answer given by a Rolls-Royce engineer was: “There is really no magic about it – it is merely patient attention to detail.” If the unique front suspension design of the new Rolls-Royce Ghost is any guide, that philosophy is still alive and well more than 60 years later.

Rolls-Royce engineers named their new design Planar Suspension, reflecting the feeling that the Ghost is riding on a flat plane. It goes much further than that, though, by tackling the subtle nuances of ride quality that sometimes even the best of premium cars struggle to get right.

Ride quality is split into two categories, primary and secondary, which could equally be described as low frequency and high frequency. Primary refers to the suspension’s ability to soak up large bumps and undulations in the surface with larger, lower-frequency movements. Secondary refers to the smaller, high-frequency movements caused by minor bumps and road surface imperfections.

The engineers became aware their air suspension had become so good at dealing with those low-frequency inputs that they were noticing the high-frequency inputs more. They had the feeling that however good, the car could feel more settled if they were able to further reduce the excitation coming from the surface through the tyres, springs and dampers and into the body.

One way to damp down high-frequency vibration is to add mass, a course of action they had already taken elsewhere by adding a swinging mass to the seat frame and on the rear chassis cross members.

Mass is sometimes confused with weight, but the two are different. Weight is due to the attraction of gravity whereas mass represents the material in an object and remains the same in outer space as it does on earth. The greater an object’s mass, the more resistant it is to being accelerated, so it can dampen high-frequency vibrations.

The team had the bright idea of mounting a smaller wishbone of a precisely calculated swinging mass, articulating on the main upper wishbone, to absorb some of the energy that would otherwise be transferred into the body. Patient development and testing of multi-stage rubber bump stops on the small wishbone ensured they would completely soak up any contact between the two wishbones over the worst bumps and potholes.

At the rear, a five-link suspension system incorporates rear-wheel steering, which turns in the opposite direction to the front wheel at manoeuvring speeds and the same direction at higher speeds. Rear-wheel steering can at higher speeds make a car feel as though it’s crabbing. This system simply deflects the mounting bushes to gently move the suspension components. The subtle but imperceptible ‘anti-travel sickness’ effect it creates is to remove the uncomfortable swimming feeling large cars can give the occupants when changing direction.

Make mine a double 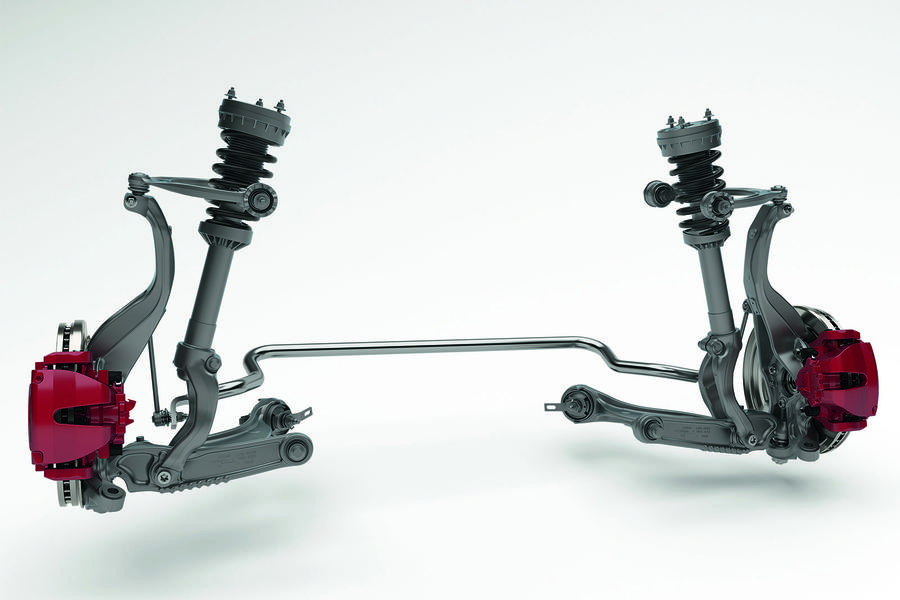