Subaru has officially confirmed that the next-gen BRZ sports car will be unveiled on 18 November, but will not be coming to Europe.

A brand spokesperson told Autocar that the coupé will be a US-only model, and that there are “no plans” to launch it in Europe, as is the case with Nissan’s similarly positioned new 400Z. It remains unclear whether the BRZ’s Toyota GR86 sibling will be a global model.

A preview image recently released by the brand gives little away beyond the design of the car’s new 10-spoke alloy wheels, but prototype of the next-generation BRZ was spotted earlier this year, giving us a first look at the hotly anticipated sports coupé’s production styling.

As reported earlier this year, It will get 252bhp from a turbocharged petrol engine. Like its predecessor, it will be mechanically – and likely visually – identical to a Toyota model expected to be called the GR86. A reveal date for the BRZ’s twin has not yet been confirmed, however.

The images reveal that the BRZ’s familiar curved silhouette forms the basis for the styling of the next-generation car, but we can see for certain that the front grille has been significantly enlargened and there are new light designs at both the front and rear. 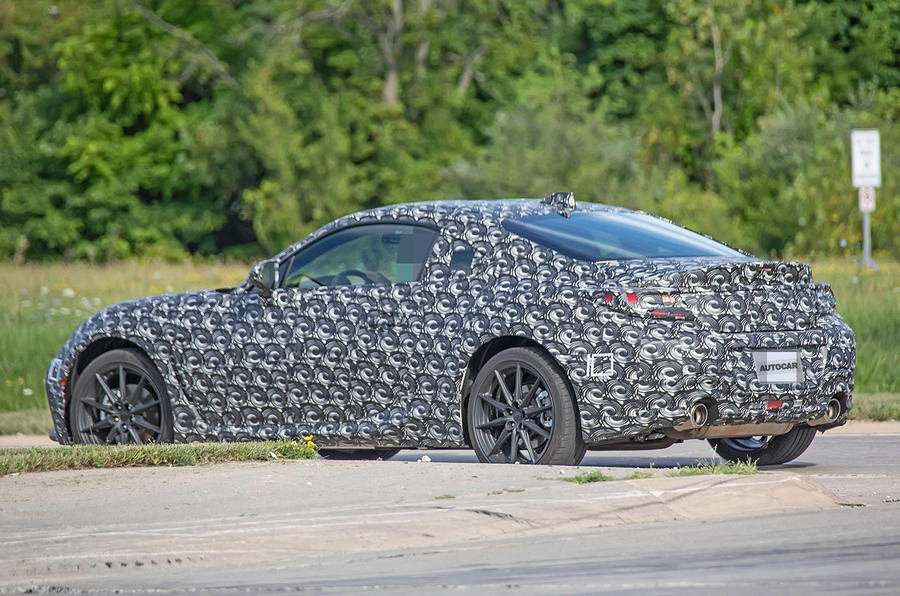 A similarly compact footprint to the outgoing model tallies with earlier reports that the Toyota-Subaru duo will swap from their current Subaru-derived underpinnings onto the TNGA architecture that underpins Toyota’s Corolla family hatchback and can be adapted to suit a rear-wheel-drive powertrain. Subaru has now confirmed that the second-gen car will be rear-wheel drive.

As with the previous model, however, the BRZ and its GR86 sibling will use an engine from Subaru’s current line-up, likely the 2.4-litre four-cylinder boxer motor found in the US-market Ascent SUV. Its 252bhp output represents a substantial upgrade over the 197bhp offered by the current BRZ’s naturally aspirated motor, which suggests Subaru and Toyota are looking to target more potent sports cars, such as the Alpine A110.

Also on the cards is a comprehensive interior overhaul for both models, with improvements made in material quality, infotainment functionality and usability. The size and shape of this new prototype suggests, however, that there hasn’t been a move to significantly extend rear leg room to enhance the car’s grand touring potential.

Subaru and Toyota extended their model development partnership last year, confirming that a successor to the GT86 and BRZ was under development. Sharing the high cost of designing and building a sports car makes it a more economically viable proposition, given that demand for such models has tailed off in recent years.