Ford, I’ve read, couldn’t afford to homologate a wing, but then again neither could BMW. For the first 110 Batmobile road cars, the spoiler arrived in the boot. It hadn’t actually been type approved for use on the autobahn, and so owners had to screw it on themselves, although you probably already knew that.

In the end, not only did the CSLs hammer the Capris on track in 1973, but they were also, by all accounts, much nicer to drive. The steering was light and accurate and the chassis was super-progressive in its oversteer balance compared to long-snouted Fords, which understeered horribly, according to the works drivers. It won the ETCC again in 1974, then in ’75, ’76, ’77, ’78 and ’79. I think people forget how dominant the CSL became. 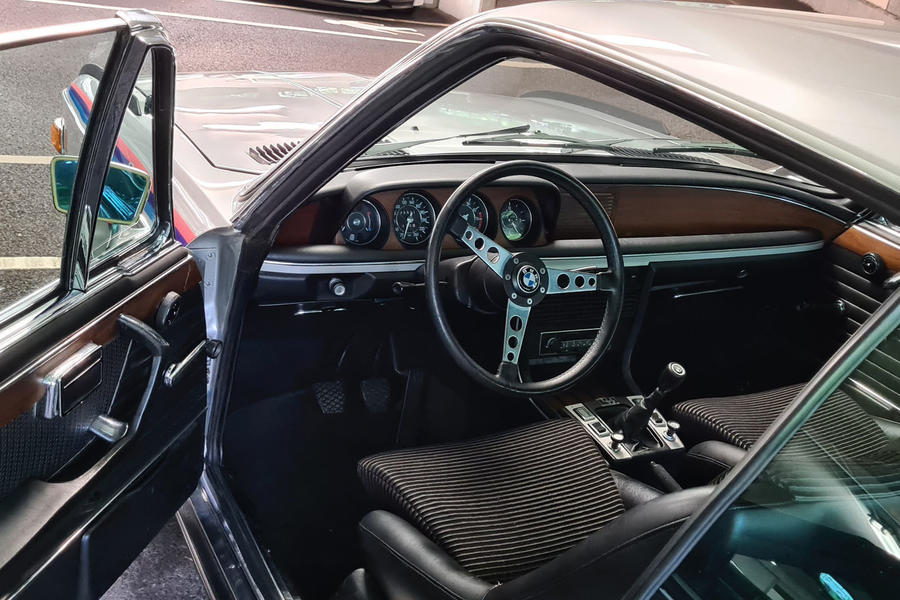 Well, if the outside is necessarily a bit of a mess (Malcy certainly wouldn’t have full Bat spec), the interior is elegant, so the car is the opposite of, say, the Mk1 Ford Focus RS in this respect. And you might expect as much, given the original E9 was an unashamed tourer, being opulent and fairly heavy.

There’s wood, Bakelite, a trio of wonderfully simple dials, and the A- and C-pillars are so slim that you feel sat inside a bubble. The long-wave ride quality is also excellent – soft, possibly a little gloopy at times, but not at all nauseating – so despite being seriously hardcore by the standards of the time, the Bat would make a fabulous tourer, even today. If only that solitary wing mirror didn’t generate Antonov AN-225 levels of wind roar…

But despite the luxury, there’s real intent. The spokes on the steering wheel are holed out, and I was surprised to find that the rare Scheel bucket seats are every bit as supportive as the carbon shell seats you’ll get in the latest GT3 RS, at least from the base of the ribcage down.

It’s also a bit ropey in parts, albeit in a distinctly homologation-y manner. From the driver’s seat, you can see daylight between the metal of the wings and the ridiculous plastic canards, which don’t sit quite flush. On the move, the wing flexes horribly in your rear-view mirror. And, to borrow the words of Roger Bell, himself recycling Martin Brundle, racing cars are pigs to manoeuvre at low speeds and the CSL is no different. I took my Lancia Delta Integrale out the following weekend and the low-speed steering was so light by comparison that it could have been transplanted from an i3. The Bat is a barge about town.