You can imagine trying to justify it, can’t you? Because I know I did it. “No, it’s not a game or a way to idle. It’s a simulator. A valuable training device. Honest.”

Well, yes and no. Simulators are an increasingly invaluable tool for developing cars and drivers. At the top end, machines that cost millions and occupy sizeable portions of warehouses will be used for 24 hours a day at senior car manufacturers, major suppliers and racing teams.

From a road car firm’s standpoint, if buying one can eliminate a phase of real prototype build, it will already have paid for itself by the time one production car has been developed.

From a race team’s perspective, a driver and their engineers can visit several circuits in one day, which are so accurately mapped and with car dynamics so realistic that they can gain testing data down to an idea of which suspension settings and gear ratios will work best.

Computing power is now so vast and modelling so good that simulators aren’t a way to waste time and money: they’re an invaluable way to save time and money.

They’re also precisely the opposite, which is something your significant other might see through, regardless of how you frame the argument.

Curv Racing Simulators sits somewhere between the two. The Banbury firm – part-bossed by Le Mans class winner and Aston Martin development driver Darren Turner – has full simulators with vast screens for hire at about £200 per hour.

Racers find them exceptionally useful; some drivers leave wishing they had a Curv simulator at home. So now Curv also makes the AMR-C01, which is aimed at reducing one of the barriers to ownership: the ugliness of a typical set-up, all bare metal and cables. “Most people keep them in a separate room,” says Turner.

It’s a full carbonfibre rig, with the main shell weighing 22kg, to which a 49in curved screen, a Recaro seat, a bespoke wheel and pedals and a high-spec computer are added to leave the whole thing weighing just 55kg. Advanced? It should be, for £57,500. If I could, I probably would. 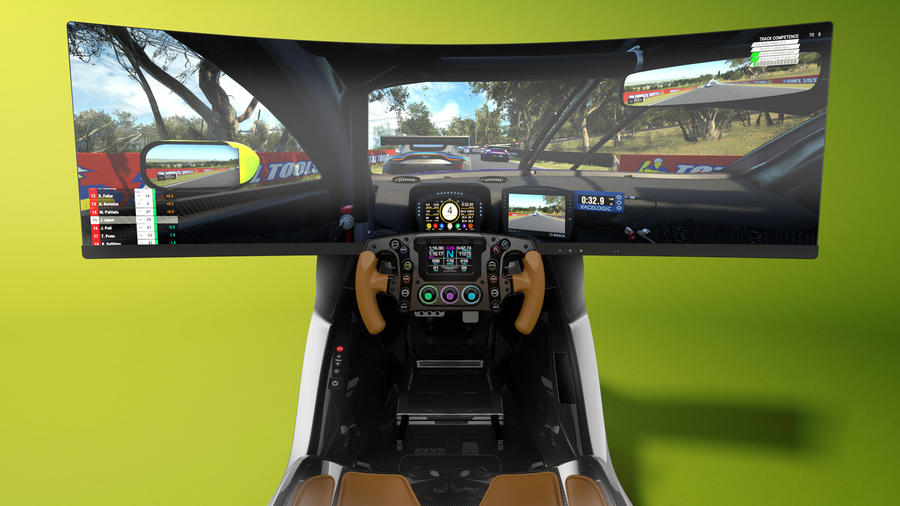 The driving position is modelled on the Aston Martin Valkyrie, which is akin to single-seaters’: feet up, with an adjustable seat and pedal box.

It all remains compact within an Aston-designed pod that can fit upended in a lift; one customer lives on the ninth floor of a Tokyo high-rise. Part Aston, part bobsleigh and part jet ski in appearance, it’s simulator become furniture.